Inflation took center stage once again, with the consumer price index rising 9.1% from a year earlier for the month of June. This was the largest increase since the end of 1981, and the widely observed inflation gauge increased 1.3% from a month earlier, reflecting higher gasoline, shelter, and food costs. 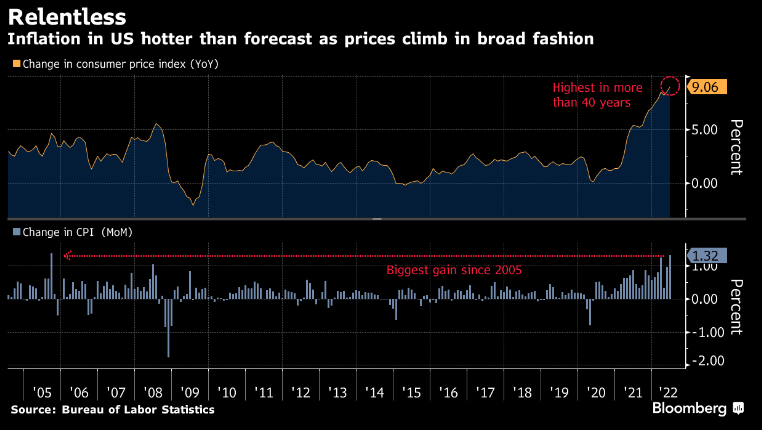 The higher reading took markets by surprise, and based on Bloomberg survey medians, economists projected a 1.1% rise from May and an 8.8% year-over-year increase. This result surpassed expectations for the fourth consecutive month. Even core CPI, which removes the more erratic food and energy components, advanced 0.7% from the prior month and 5.9% from a year ago.

On July 27th, 2022 the 100 basis point increase in rates did not come to fruition, and the U.S. Federal Reserve rose interest rates by 75 basis points for the second straight meeting. This move brought the federal funds rate target range to 2.25% - 2.50%. Is this a ceiling for rates going forward? Not likely. In fact, markets are currently pricing in another 100 basis points of hikes for the last three meetings of 2022.1

The ultimate goal for the Federal Reserve is to create a soft landing for the economy and avoid a deeper downturn. Since they have little influence over supply chains, geopolitical developments, or the creation of physical assets, they attempt to increase borrowing costs in an effort to contain inflation while maintaining overall demand.

Each month, the world is receiving drips of information that either confirms or refutes the development of a soft landing. As of the Fed’s last meeting, the FOMC noted that “recent indicators of spending and production have softened,” but also added that job gains “have been robust in recent months, and the unemployment rate has remained low.” Furthermore, Chairman Jerome Powell stated that the economy is not in a recession, citing a "very solid labor market" as evidence.

While the traditional definition of a recession, as we wrote in a prior post, is two consecutive quarters of negative real GDP growth, the National Bureau of Economic Research (NBER) defines the term as a “significant decline in economic activity that is spread across the economy and that lasts more than a few months.”2 The NBER looks at many indicators, but Eric Basmajian from EPB Research tracks the four major indicators used by the NBER.

Looking at the composite trend of the indicators below, a soft landing looks almost out of reach. Industrial production, nonfarm payrolls, real retail sales, and real income ex. transfer payments are all declining. Generally, a real recession will be announced when all four (or most) of these indicators are negative. We aren’t quite there yet. 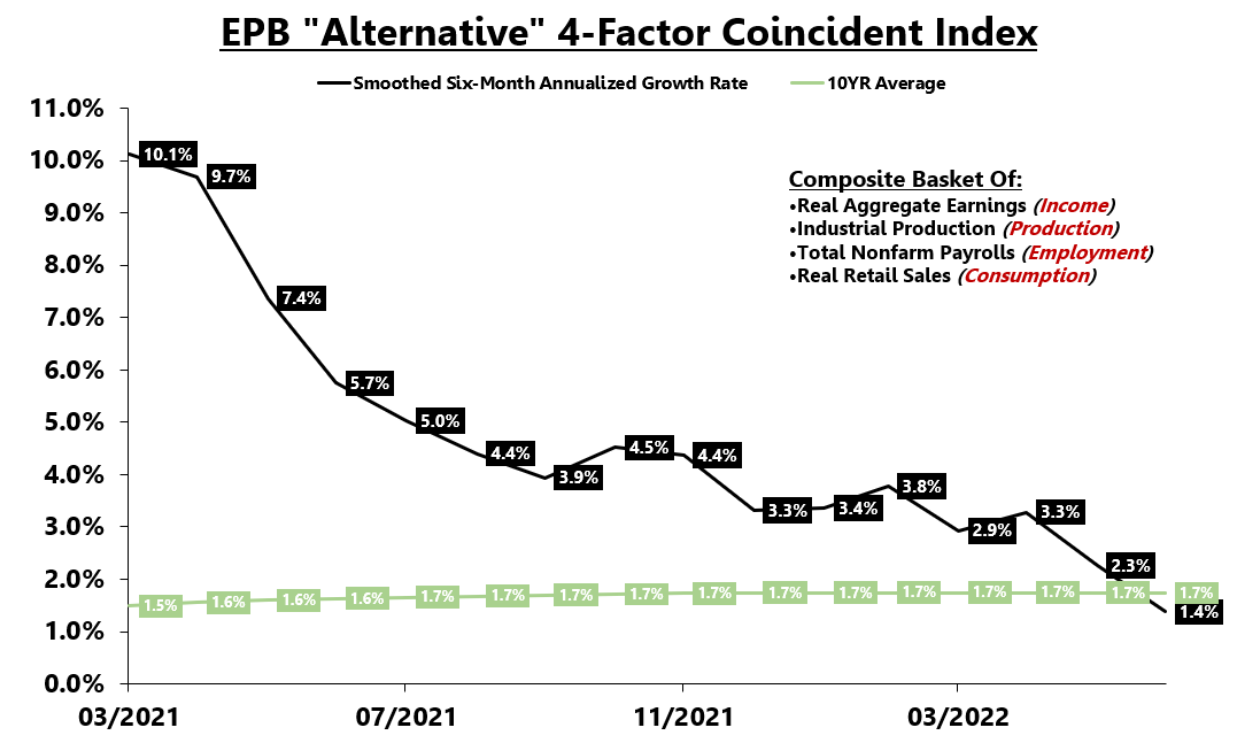 Despite the U.S. economy shrinking for a second straight quarter (falling at a 0.9% annualized rate) and the Federal Reserve tightening financial conditions, the S&P 500 rose +9.11% for the month of July and rose +12.64% from the June 16th low.

What’s more, commodities have come down quite considerably. As of the end of July, the Bloomberg Commodity Index fell 11% from its high, and most energy and metal commodities were down double digits the last 3 months. More importantly, average prices at the pump have fallen from a high of $5.00 a gallon to as low as $4.20 a gallon.3

Lower commodity price inputs may indicate future readings of lower inflation, and we believe that the downward trend in bond yields over the past two months is a result of both these lower prices and a possible recessionary event. As we write this, the 10-year Treasury bond is yielding 2.69%. The high was 3.5% in mid-June.

A double-digit decline in stocks during the first half of the year was a tough pill to swallow, and there has been no shortage of explanations for why markets have become increasingly volatile (inflation, Russia/Ukraine invasion, increasing rates, low consumer sentiment, and fears of a recession).

Looking back, it’s easy to spot the headlines that drove markets. Staring into the future and deciding what to do next is the harder part.

The July rally may or may not have marked the bottom for the stock market. In any event, a long-term investor who is ready to zoom out just three, five, or ten years may find solace in sticking to their plan. 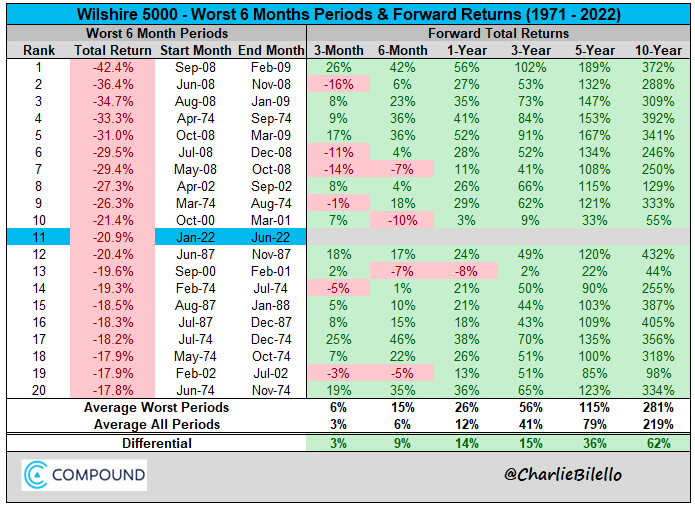