From Correction to Bear Market

Inflation and recessionary worries continue to dominate news flow in May, and Google Trends of these particular words have spiked to notable highs as of late. Additionally, the war in Ukraine has created second-order effects worldwide as the conflict has created well-publicized impacts on commodities. Investors are now dealing with what Dan Kemp at Morningstar is calling the “Triple R”—recession, rising rates, and real household income decline.

While the traditional definition of a recession is two consecutive negative quarters of GDP growth, the National Bureau of Economic Research (NBER) defines the term as a “significant decline in economic activity that is spread across the economy and that lasts more than a few months.”1

So, has the U.S. economy experienced a significant decline in activity yet? And if it has, what does it mean for stock prices?

Looking at the Commerce Department’s preliminary estimate for Q1, quarter-over-quarter real GDP fell at a 1.4% annualized rate, dropping below the median projection in a Bloomberg survey of economists calling for a 1% increase. The contraction during the quarter can be largely attributed to more imports than exports and a slower buildup of inventory across the corporate sector; however, the report also showed that personal consumption, the largest part of the economy, rose at an annualized pace of 2.7%, compared with 2.5% at the end of 2021.

Should the U.S. consumer remain strong, it remains unlikely that a recession will occur within 2022. Currently, Bloomberg’s probability of a recession within 12 months remains at 0, but their projected probability within the next 24 months is 32.6%. Below is a chart of recession probabilities within 24 months overlaid with U.S. recessions. In short, the probability indicator has been fairly sufficient at predicting recessions when reaching 100%. 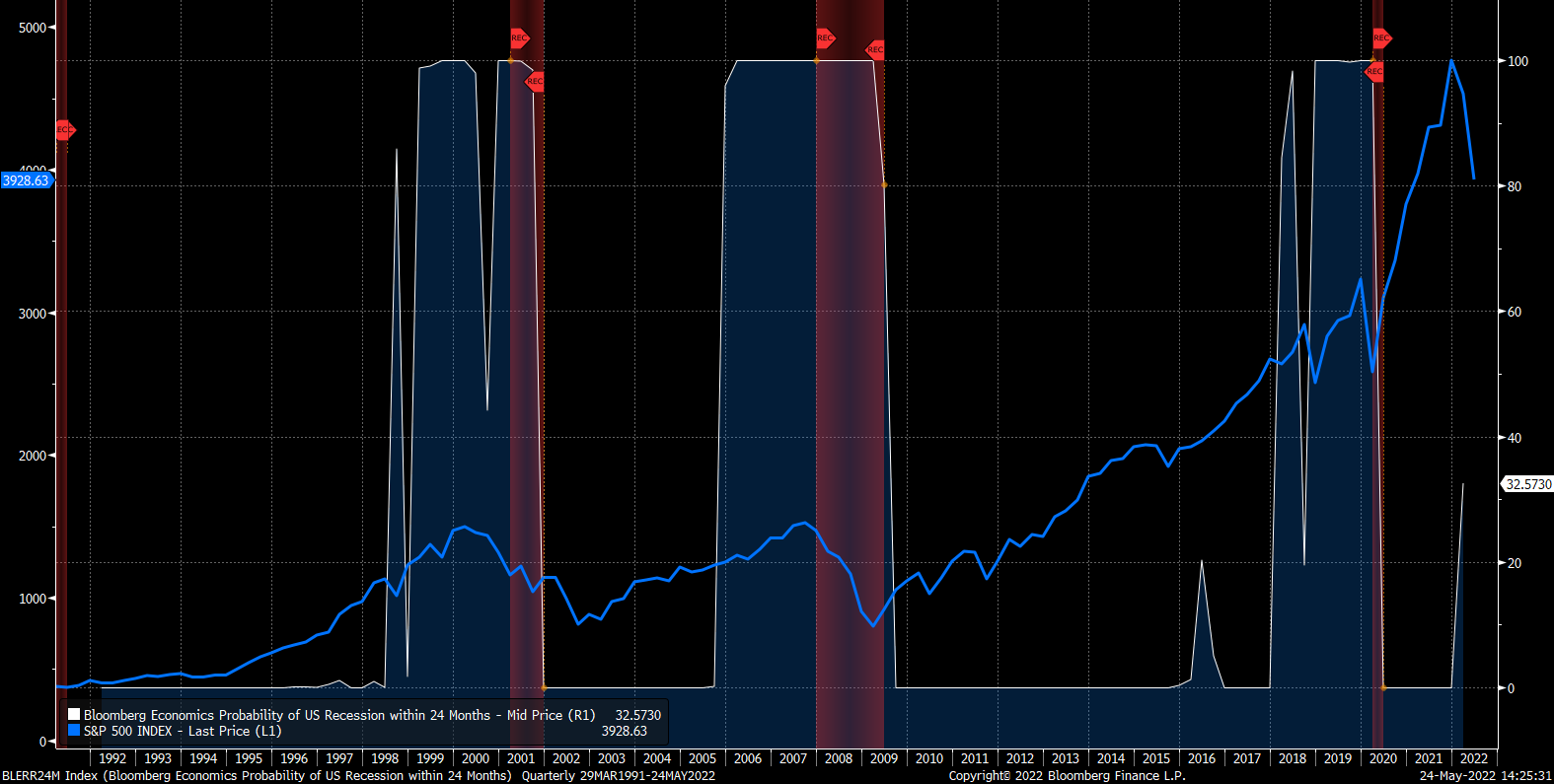 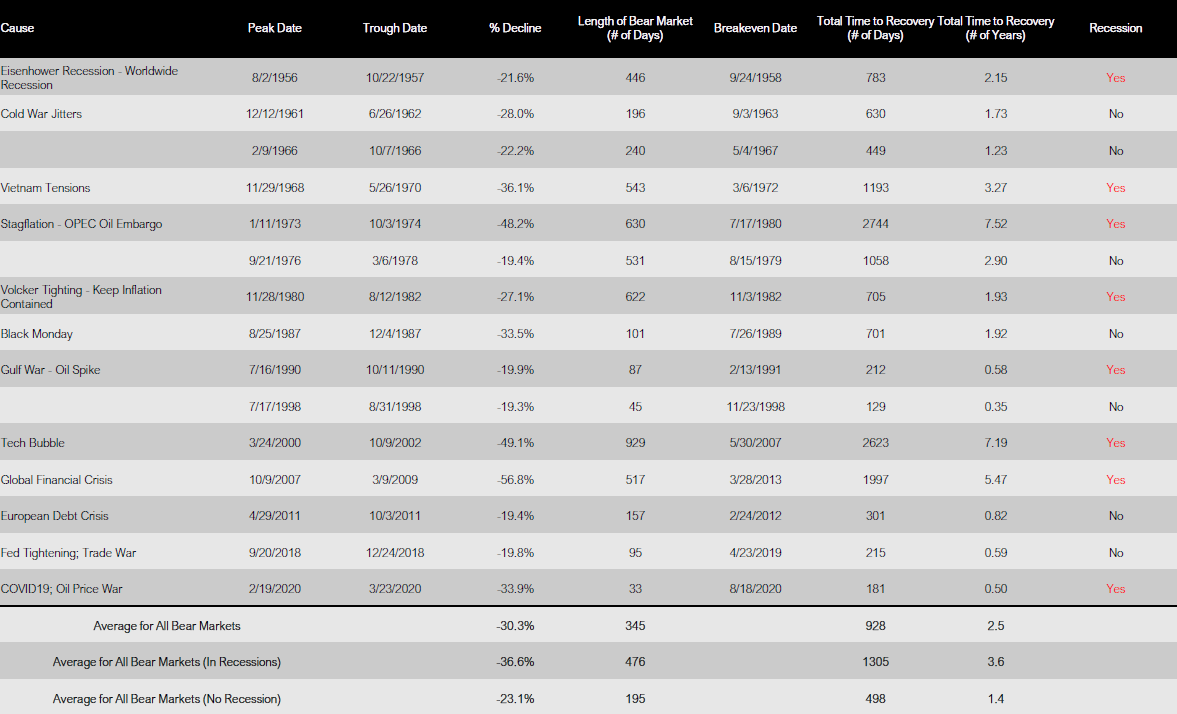 As we write this post, for the S&P 500, the intra-day peak-to-trough drawdown starting at the beginning of this year has eclipsed 20%. The NASDAQ has fared even worse, falling over 30% from the highs and less than 13% of stocks in the NASDAQ Composite Index are trading above their 200 day moving average. In fact, the NASDAQ has fallen more from the highs this year than it did during March of 2020.

Will the bleeding stop soon? Looking into our crystal ball, if history is any guide and we do not have a recession, the bottom may be in for stocks or close to it. On the other hand, should inflation remain sticky and entrenched causing the Federal Reserve to push financial conditions tighter by raising interest rates further to kill demand, more pain may be ahead for stocks.

On the positive side, earnings and cash flow multiples have come down quite significantly. The Forward P/E multiple is now on par with its 25-year average (16.74x vs. 16.85x), and almost all of the decline year-to-date can be attributed to prices paid for earnings and not earnings growth itself. Historically, lower earnings multiples for stocks has signified higher expected returns moving forward. 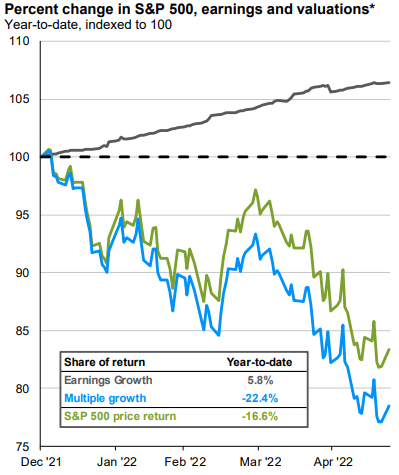 Source: Compustat, Factset, Standard & Poor’s, J.P. Morgan Asset Management. *Earnings and multiple growth are both percent changes over the next 12 months. Past performance is not indicative of future returns. Data as of May 23, 2022.

As we contemplate investing changes and decisions, it can be tempting to try and predict where the economy or earnings cycle is heading. The challenge is predicting the future twice: 1) getting out of risky assets at the right time; 2) re-entering risky assets at the bottom of the cycle. Even if one knew what was going to happen before hand, the market may not react how you would expect. The Covid-19 crash during March of 2020 was a perfect example.

While our team at Nova R Wealth is always trying to improve our process and portfolios, there are two things we will be focused on as the market has fallen from its highs: 1) rebalancing portfolios back into tolerance (taking from assets that have held up well and buying back into assets that have fallen more); and 2) tax-loss harvesting (selling investments with losses in taxable accounts to help offset current and/or future capital gains that may arise).

If you have questions surrounding the market or activity in your account, please to not hesitate to reach out to us during this uncertain time.