Three Trends to Watch for the Fall

The month of August catered to a whole host of extremely hot and humid days, but the beginning of September is starting to feel like fall is upon us. And then there is climate. It has been a season of tortuous heat waves, wildfires, droughts, and now floods. Unlike the downward trend in temperature and debilitating climate, the stock market and economy have continued their ascent higher.

Here are three trends to keep your eye on as summer winds down.

Up 21.6% year-to-date on a total return basis as of August 31st, the S&P 500 Index finished the month with its 53rd record close of the year. Accommodation from the Federal Reserve, low interest rates, and a robust economic recovery certainly have a lot to do with it. Additionally, surging corporate earnings have played a significant role in driving prices higher as well. For the second quarter of 2021, 89% of S&P 500 constituents reported positive sales growth and over 86% reported positive earnings growth.1

It has now been seven months of positive price returns for the index, its longest since a 10-month reel of monthly gains that ended dreadfully in early 2018. Are these types of streaks unusual? Well, Cameron Crise, a Bloomberg columnist looked at just that question. His answer? Not as improbable as you would expect. 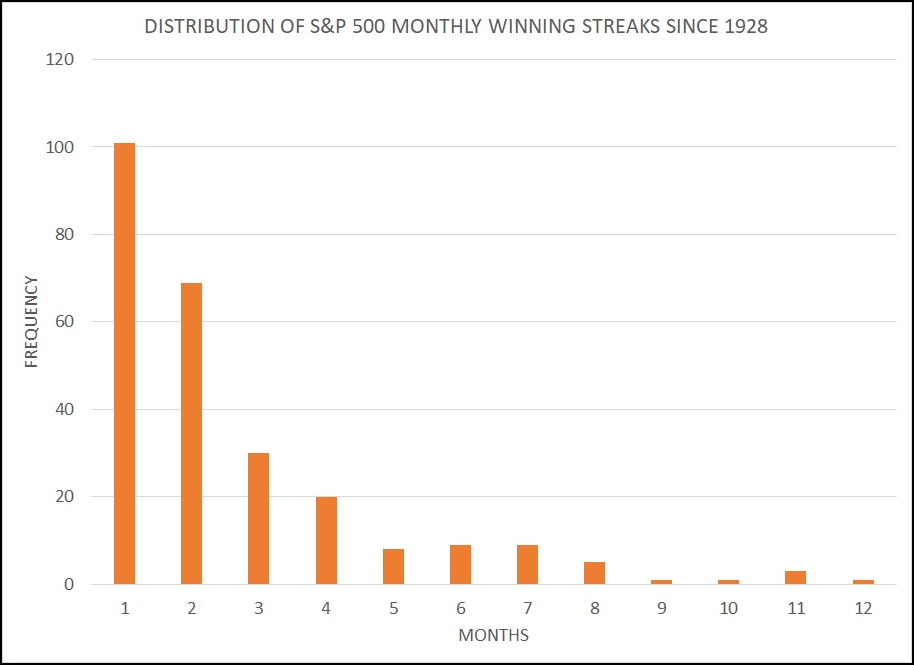 Source: Bloomberg; “Everything You Want to Know About the S&P Win Sreak”: Macro Man; Cameron Crise

This has been the 20th monthly winning streak of 7 months or more since 1928, which according to Cameron Crise, reflects a frequency of roughly once every four years and eight months. While this streak is most certainly going to end, it does not mean it is prudent to try and time it. There has historically been a premium earned over cash for holding stocks over the long term, but it can make it harder to earn this risk premium if one tries to time it over and over by trading in and out of the market.

Inflation is continuing to run hot

You don’t have to go far to notice it, but inflation has certainly taken hold. This rise in the prices of goods and services has been generated by enormous monetary and fiscal stimulus, a strong economic recovery, and supply chain bottlenecks.

Monthly reports from the Institute for Supply Management (ISM) can often provide a glimpse into how businesses are assessing and viewing the current economic environment. The latest report sings a different tune than the “transitory” inflation narrative espoused by the Federal Reserve. ISM Chair Tom Fiore noted, “Business Survey Committee panelists reported that their companies and suppliers continue to struggle at unprecedented levels to meet increasing demand. All segments of the manufacturing economy are impacted by record-long raw-materials lead times, continued shortages of critical basic materials, rising commodities prices and difficulties in transporting products.”

U.S. central bankers seem to be at odds with one another as to where this inflation story leads, but there has been increased discussion surrounding scaling back their quantitative easing measures.

Fiscal spending ratcheting back up

In early August, the Senate voted to approve a piece of legislation that would boost infrastructure spending by $550 billion over several years. This new spending is above and beyond what Congress was already planning to allocate to infrastructure over the next eight years, and it includes funding for transportation infrastructure, clean drinking water, and broadband.

Following the passage of the bill, the Senate will likely take up a budget resolution that will call for $3.5 trillion in additional spending, which will primarily be financed through tax increases. However, Goldman Sachs Research estimates the budget reconciliation bill will come down to $2.5 trillion due to a shortfall in increased tax revenue to offset some of the spending.

A budget reconciliation bill passing will require the unanimous support of all 50 Democrats in the Senate, but there seems to be pushback lately from Senator Joe Manchin. His reservations were displayed in an op-ed in the Wall Street Journal, citing rising inflation and a soaring national debt as key roadblocks.

Should the Democratic Senator from West Virginia adjust his strategic thinking and vote in favor of the bill, a conceivable outcome could be an increase in the corporate tax rate to 25%, a 28% long-term capital gains rate, a 39.6% top marginal individual tax rate, greater overall tax enforcement, a tighter global minimum tax rate on multinational companies, and a variety of smaller changes to non-corporate business taxes.2

If these tax changes do become set in stone, they are likely to influence the prices of financial securities and market conditions. As shown in the accompanying chart below, which illustrates the price return of the S&P 500 Index six months before and six months after capital gains taxes were increased, by and large, the six months before capital gains are increased represent the periods of heightened risk to equity prices. 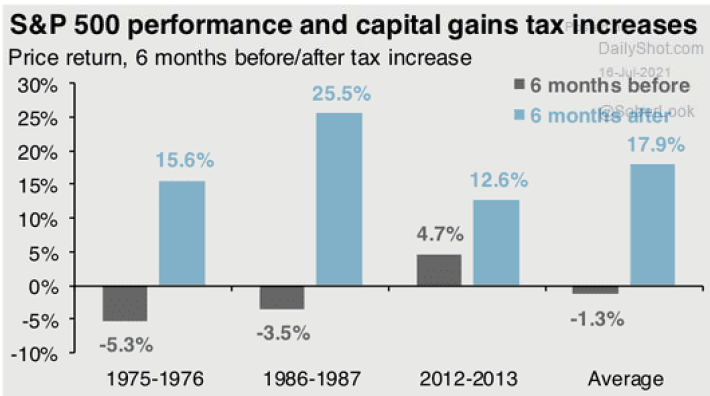 We wish each of you a wonderful rest of the summer and smooth sailing into the leaf-strewn autumn months.