The Price of Admission

Other slices of the stock market are falling off even more steeply. The NASDAQ Composite is down more than 15% and small cap stocks (represented by the Russell 2000) are down almost 18%.

Typically, narratives surrounding the market follow prices; not the other way around. So, what exactly is going on? We believe it can be chalked up to three main headlines: 1) persistent inflation; 2) a shifting monetary policy; and 3) slowing growth.

1)  Inflation: U.S. consumer prices rose 7.0% from December 2020 and increased 0.50% from the previous month, extending a concerning trend of sizeable increases that began in early 2021. Gasoline, shelter, food, and vehicles were among the largest contributors to the year-over-year increase. This was the highest year-over-year reading since 1982, and forecasts from Bloomberg suggest an annual inflation rate of just below 5% for 2022. However, forecasts for 2023 point towards inflation moderating to 2.4% on an annual basis.

The arguments circulating in favor of sustained inflation levels point to (1) low levels of unemployment and increasing wages, (2) rising energy costs, (3) higher shelter costs being reflected in the CPI basket, and (4) companies passing along higher input costs. In contrast, the arguments in favor of moderating inflation point to (1) factory production increases to meet demand, (2) global logistics channels working through backlogs, and (3) fiscal spending falls back toward normalcy.

High and persistent inflation has historically fared poorly for stocks due to uncertainty surrounding the future cash flows of businesses. Investors tend to discount this unknown by paying a lower multiple of earnings, which can lead to depressed stock prices in the short to medium term. Should inflation manifest at the current rate for an extended period of time, the stock market could react quite poorly.

2)  Monetary Policy: In response to Covid-19, the Federal Reserve began purchasing large amounts of Treasury bonds and mortgage-backed securities from banks to help improve liquidity in the market, keep interest rates low, and encourage lending. With the economy coming back online, the Federal Reserve will start to slow the pace of asset purchases. In addition to the announcement of tapering the balance sheet, newly published economic projections released by the Federal Open Market Committee (FOMC) indicate that Fed officials expect to raise policy interest rates more quickly than previously expected. The market is now pricing in roughly four interest rate hikes this year, which would leave the implied policy interest rate at 1%.1

Interest rates can act as gravity for cash flow generative investments. In particular, investments whose value comes mostly from earnings far out in the future. This is why the NASDAQ Composite—an index comprised mostly of technology and communication service stocks—has fallen harder than the S&P 500 year-to-date.

3)  Growth Slowdown: Real GDP growth for 2021 is estimated to come in at roughly double the average trend over the last 10 years (+5.6%), but 2022 real GDP growth is expected to fall closer to +3.8% and 2023 real GDP growth is estimated to drop back in line with previous years at +2.5%. Coupled with falling GDP growth, after-tax profits for the S&P 500 members are projected to decelerate even more meaningfully, from +45.1% in 2021 to +9.2% in 2022.2 Without the fiscal stimulus tailwinds presented in 2020-2021, it will be much harder on a go-forward basis for corporations to maintain peak operating margins.

These three headlines may be what is driving the current sell-off in assets, but there are always uncertainties in the market. Especially uncertainties not yet known to market participants.

Each year, we update the chart below that illustrates the growth of $1 invested in U.S. small cap stocks, U.S. large cap stocks, long-term U.S. Treasury bonds, and U.S. Treasury bills. Since 1926, one would be hard pressed to find a period where risk did not appear. Yet, each of these assets has maintained its purchasing power over inflation in the long run. 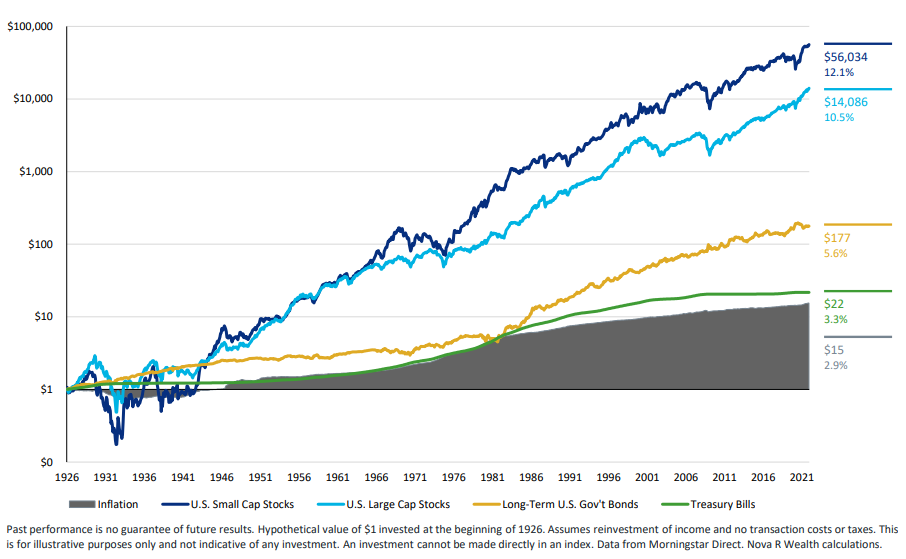 The price of admission to receive a return above Treasury bills is a steep one. You cannot receive the outsized returns from stocks in the above chart without dealing with the dreaded drawdowns from the chart below. 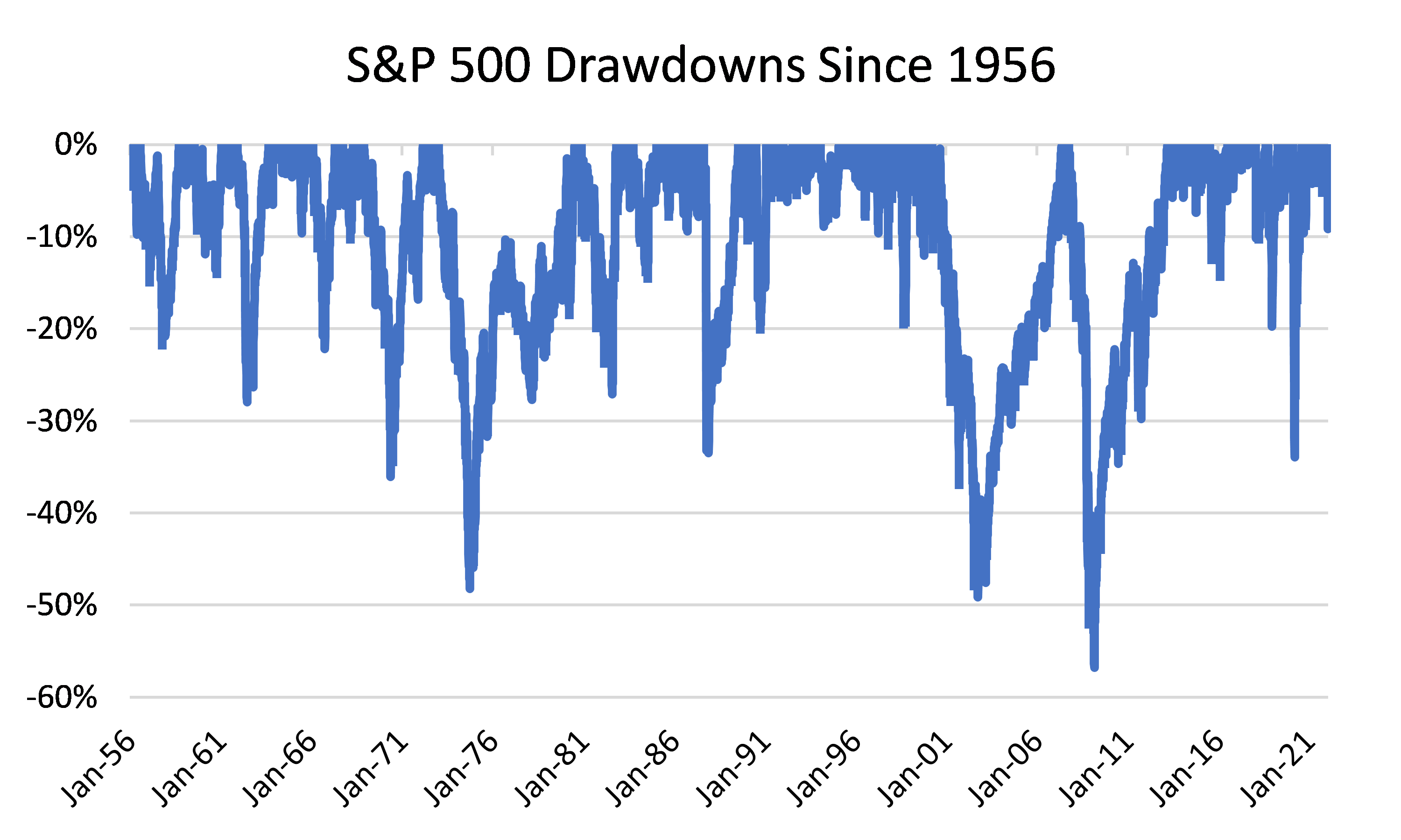 Going back to 1928, the average drawdown from peak-to-trough in a given year in the U.S. stock market is -16.3%.3 In almost 2/3 of the years, an investor could expect a double digit correction at some point during the year. The occasional sell-off is why investors have earned a handsome return over inflation over the long term. The risk and uncertainty of the stock market is a feature, not a bug. 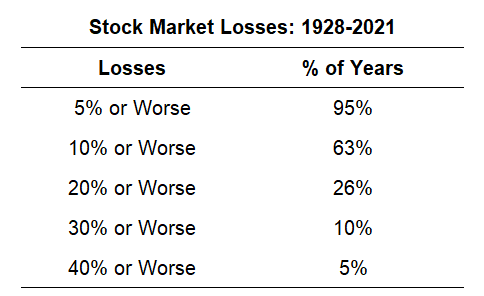 Source: awealthofcommonsense.com; “How Often Should You Expect a Stock Market Correction?”

Morgan Housel, author of ThePsychology of Money, recently tweeted, “All past declines look like an opportunity, all future declines look like a risk.” The current decline doesn’t feel good in the moment, but it also isn’t out of the ordinary either.

Lean on us. We are here to help each of you through the uncertainties and keep each of you focused on your specific goals.