The Agony of Extraordinary Returns

After returning 5.8% in the first quarter of 2021, the S&P 500 has continued its bull market advance, adding over 5% more in the first two weeks of April alone. The market could very well continue to make new highs on the back of improving expectations surrounding vaccination efforts, a reopening of the economy, and stellar first quarter corporate earnings and forward guidance.

There are concerns that the market is too expensive on virtually every metric one can look at, and that if interest rates on longer maturity bonds continue to rise, it could put pressure on valuations—especially stocks generating a majority of their value from future projects and cash flows.

While we would agree with these concerns, the larger risk is that if the market continues to chug along further than even the most optimistic market bulls believe without a commensurate rise in earnings, it could make the vast majority of stocks unattractive even with a longer time horizon. A chart illustrating the year-over-year % change in the S&P 500 shows just how unprecedented this rally has been in such a short amount of time.

It was Sir John Templeton, who said that “bull markets are born in pessimism, grow on skepticism, mature on optimism, and die in euphoria.” Looking at the above chart, one can certainly say we are at least in the optimism phase and various pockets of the market are breaking out into euphoria.

A large risk now is that stocks get ahead of their skis, as they did in 1999 and 2000, which could lead to a market generating no returns for a decade. However, valuations alone do not cause market meltdowns. In fact, market calamities have occurred at valuations below and above averages, and high valuations can’t always be used as a timing mechanism. While valuation models can be useful, they may not always be right on the timing aspect due to the complexity of what drives markets and human behavior.

One year ago, the best description of human behavior was “fear”. Now there is optimism grounded on the belief of an accelerated vaccine uptake, rising earnings and cash flows, economic growth, and interest rates that provide no real rate of return compared to inflation. With interest rates as low as they are, the path of least resistance may be higher for the market.

World history is a never-ending story of competitiveness and creative destruction. Michael Cembalest from JP Morgan Asset Management, measures this creative destruction within the U.S. stock market in a number of ways and has recently updated a fascinating paper from 2014.

Since 1980, the total percent of companies experiencing a catastrophic loss from all sectors was 44%! In this context, “catastrophic loss” is defined as a company’s share price declining 70% from peak levels which it has not recovered. 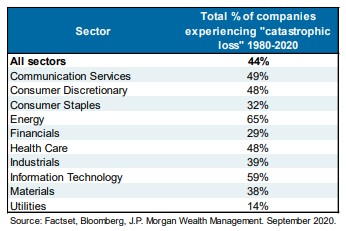 Furthermore, another way to think about the concentration risk of owning a single company is to look at the tradeoff of owning cash or the Russell 3000 Index vs. the individual position.

Below is a visualization of the distribution of winners and losers compared to the Russell 3000 Index. The underlying message is that the “megawinners” generate colossal excess returns, and the median excess return of individual stocks actually ends up being less than the index.

What is the price one pays to hold on to such a titan? Drawdowns come to mind, and in this case in particular, multiple drawdowns over 60%. 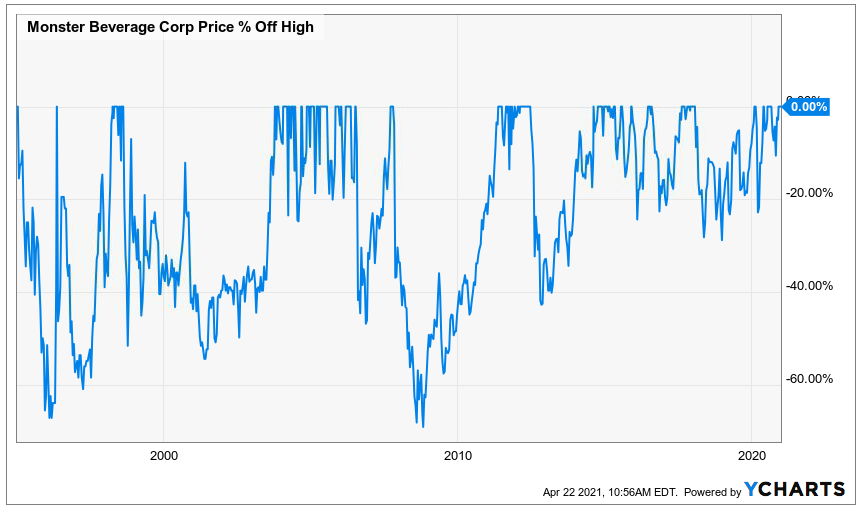 There are some key takeaways here.