After months of deliberation over whether inflation was temporary and to what extent, the US Federal Reserve has responded in a strong fashion. By raising the federal funds rate by 75 basis points—the largest single increase since 1994—the Fed demonstrated its commitment to finally addressing persistently high inflation through monetary policy.

The federal funds rate now sits in a range of 1.50% to 1.75%, and Chairman Jerome Powell noted that another 75 basis-point hike, or a 50 basis-point move, was likely at the next meeting in July. Market participants are now forecasting interest rates to rise even further this year, to 3.4% by December but declining to 3.2% by the end of 2023. This is a big upgrade from the 1.9% and 2.8% that the Federal Open Market Committee (FOMC) penciled in for their March projections. 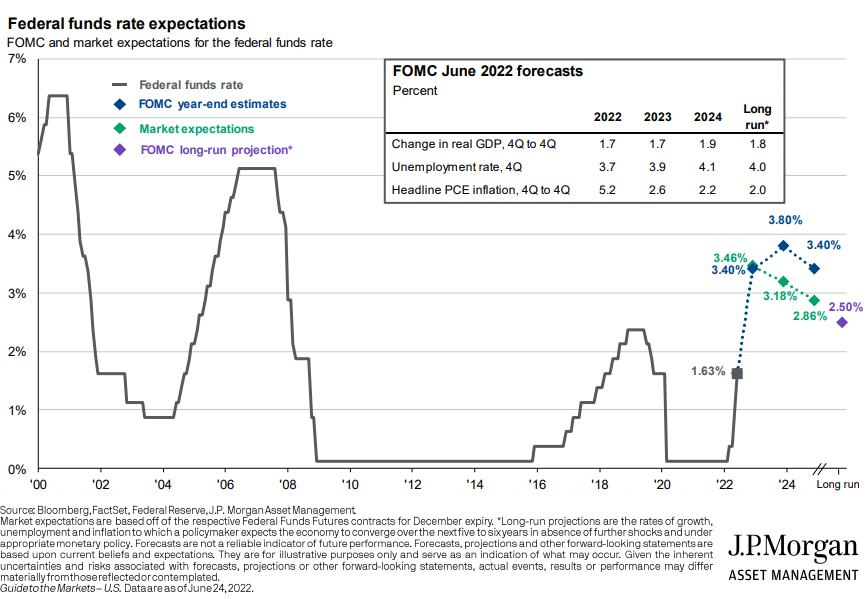 Higher interest rates can act as a force of gravity within the financial system, and the goal is to increase borrowing costs to quell demand within the economy without tipping it into a recession. But, as we all know, inflation also has a supply component to it—a component that the Federal Reserve has no control over. Much of the current inflation is a result of supply-side increases such as input costs for goods and the cost of energy.

Due to inflation largely out of the hands of the Federal Reserve, it’s unlikely actions from the central bank will be a remedy for today’s market pains.

As we think about navigating markets today and where they might go, it is important to understand how the regime has changed and the potential implications moving forward.

Looking back at the first six months of the year, there is no way around it. The U.S. economy was battered by numerous shocks in the first half of 2022, including more pandemic waves, considerable inflation pressure, and the effects of China's "zero-COVID-19" policy and Russia's invasion of Ukraine.

In response, asset prices decreased, with returns across most asset classes suffering losses and very few places to hide. So far, US equity benchmarks (large cap, small cap, and growth) are down 20%-30% from their highs and the US has experienced just one quarter of negative GDP growth. Taking a look under the hood, equity markets seem to have sustained more damage than what the index levels are showing.

The average stock in the S&P 500 Index, Russell 1000 Growth Index, NASDAQ Composite Index, and Russell 2000 Small Cap Index is down 30%-40% from peak levels, with many down much more than that. Disruptive technology, digital assets, meme stocks, SPAC IPOs, and biotech stocks have fallen even further. Illustrated in the chart below is the max drawdown over the last two years for each of the representative themes. 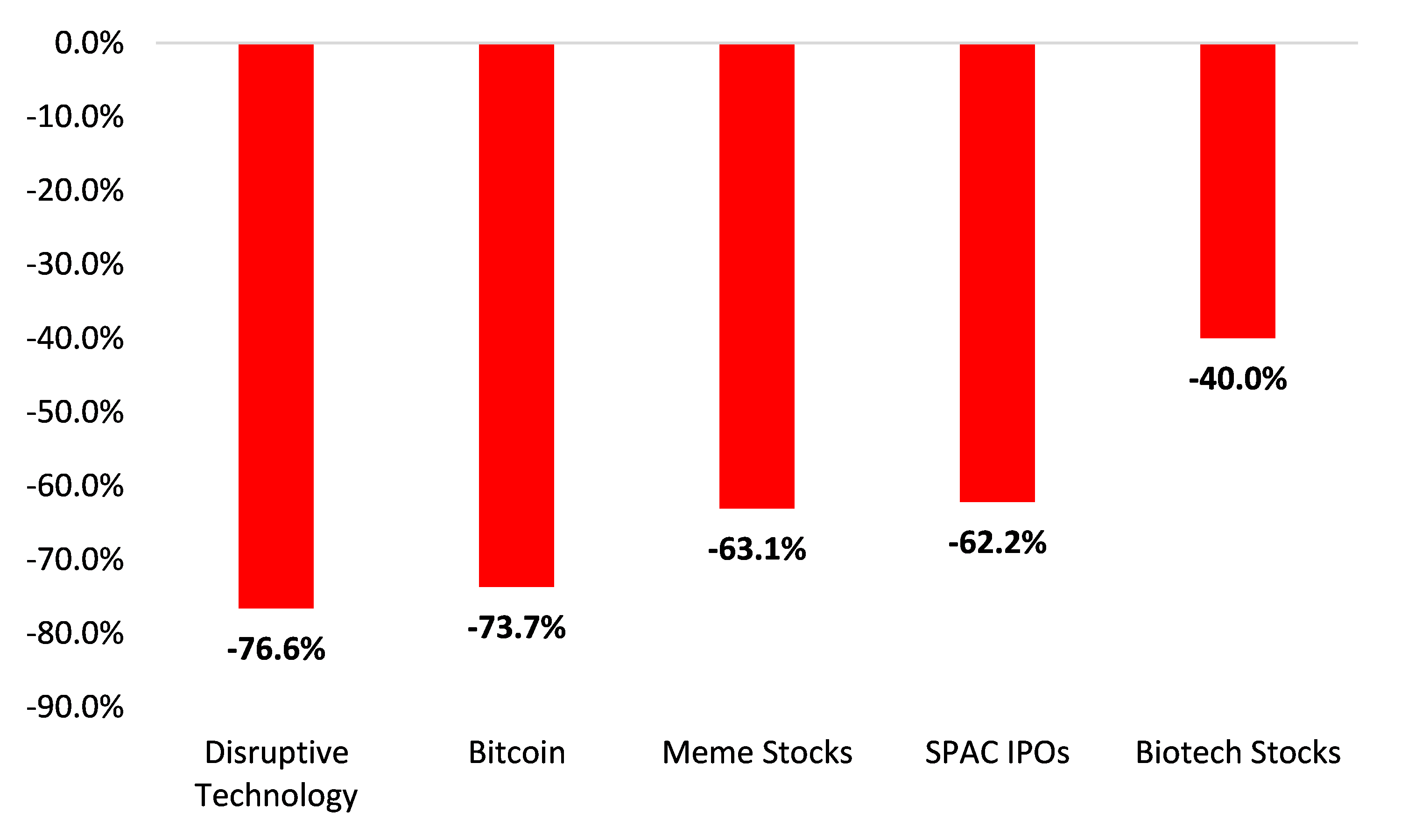 Tighter financial conditions, less accommodation from Congress, and higher interest rates have pushed investors away from speculation and growth and towards cash flow generative assets. This is a major shift from the last 10 years, and even bonds have suffered quite considerably due to the headwinds of rising interest rates. In fact, this is the one of the worst periods for the 60/40 (60% US stocks and 40% US investment grade bonds) portfolio since the 1970s. 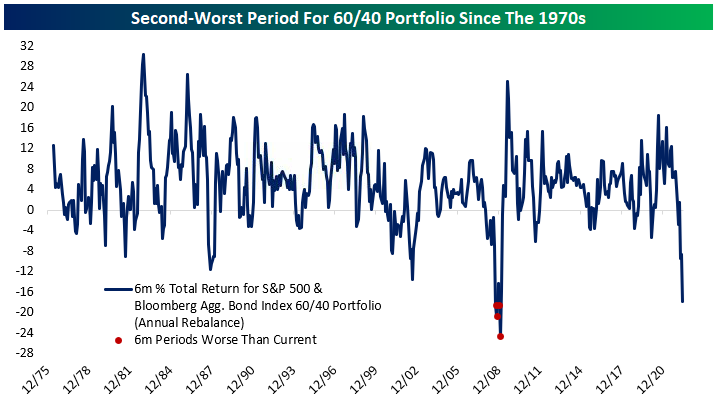 Typically, fixed income offers ballast to equities during risk-off times in the market; however, with interest rates rising in the face of higher inflation, the past protection from bonds may not continue during volatile or turbulent times ahead. This is largely due to bonds losing value as interest rates rise, as they are less competitive compared to newly issued bonds with higher rates, and due to a higher correlation between stocks and bonds. A higher correlation between two assets in a portfolio can reduce the diversification benefits.

So, where does that leave the rest of the year?

Unfortunately, much of the bad news and headwinds that drove downside in the economy and markets in Q1 and Q2 are still in place moving toward the back half of this year (higher than average inflation, slowing economic growth, rising interest rates, Fed policy uncertainty, and Russia’s war on Ukraine).

However, despite some of these challenges persisting, the labor market remains strong and consumer balance sheets are in a better position to endure a potential recession should one come along. In any case, we are left wondering if more market declines are to come.

It is only in hindsight that this question can be answered, but we can look to the past for perspective.

Avantis Investors examined how the market has performed after prior periods of decline like we’ve seen through the first 100 trading days of 2022. Going back to July of 1926, the main finding is that 70% of the next-100-day return periods were positive. So, regardless of what happened in the previous 100 days, positive returns occurred far more frequently in the next 100 days, and stocks delivered an average return of 4.45 percent. 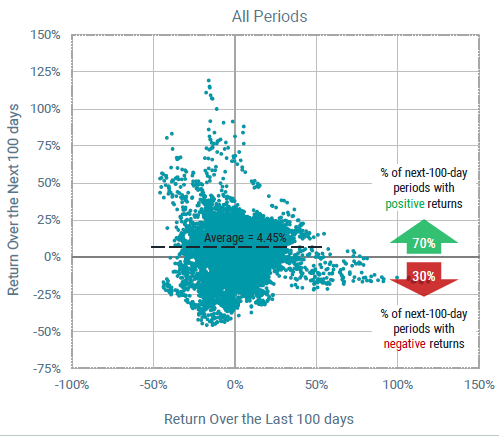 Source: Avantis Investors. Data from 7/1/1926 – 4/30/2022. The market is represented by the CRSP U.S. Total Market Index. Past performance is no guarantee of future results.

Taking a different angle, Bespoke Investment Group examined all of the instances post World War II where the S&P 500 Index was down 20% in 2 quarters. Their findings revealed that, on average, returns were positive more often than not in the following quarter, half-year, and year. 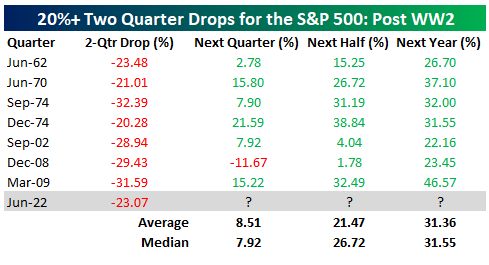 Source: Bespoke Investment Group. Past Performance is no guarantee of future results.

With the Federal Reserve set to continue normalizing monetary policy over the coming months, equity market volatility will likely persist and corporate profits will likely remain under pressure, leaving the economic picture hazy going forward. However, in every business cycle downturn, equity markets lead the economy by several months if not longer. It could very well be that economic data continues to get worse and the stock market bottoms before there is light at the end of the economic tunnel. All told, we believe the best way to approach this uncertainty is through asset allocation, diversification, and sticking to your plan without attempting to time market bottoms.