Markets and the Midterm Elections

September signaled the start of a slow, stunning transformation of green foliage to brilliant reds, oranges, yellows, and purples in many parts of the world. The month of October then brought a fall in leaves that littered the ground beneath our feet. Not only are the seasons changing before our eyes, but so have markets and soon-to-be members of Congress.

Towards the middle of October there was a swirl of rhetoric that the Federal Reserve might become slightly more dovish and produce language that would suggest it was easing the brakes a bit on tightening financial conditions. This language helped aid the stock market higher and the S&P 500 Index bounced upwards for a fifth time this calendar year from its previous lows. 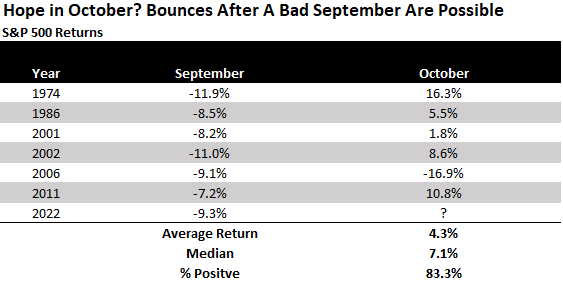 Interestingly enough, as the month of October came to a close, the S&P 500 gained +8.0%, the NASDAQ rose +3.9%, and the Russell 2000 climbed +10.9%. Aside from the accommodative language used by financial journalists, we feel that low levels of sentiment and historically favorable seasonality trends for the month of October contributed to the rise in stock values across the board.

Fed Chairman Jerome Powell spoke on August 26th at the Central Bankers Symposium in Jackson Hole, Wyoming, and again in September, reiterating the Federal Reserve's commitment to restoring price stability, affirming that a significant amount of monetary tightening is likely to remain in the pipeline, and indicating that the period of elevated policy interest rates could very well pertain for a longer-than-anticipated duration, perhaps extending through 2023 or even longer.

On November 2nd, the Federal Reserve raised interest rates by 0.75 percentage points, increasing the federal funds rate to a range of 3.75%-4.00%. When pressed about the language in the statement, Federal Reserve Chairman Jerome Powell had an overriding message for the markets: the Fed is not seeing enough evidence that inflation in coming down, therefore, the final resting place for the Fed’s interest-rate target—or the terminal rate—is going to move up.

Stocks fell on the news due to the pivot language not coming to pass. The subsequent decline in the S&P 500 was the greatest post-Fed selloff (-3.22%) in the final 90 minutes of trade on a Fed day since 1994, when the FOMC first began publishing their interest rate decisions on the day of the meeting.

Source: Bespoke Investment Management. Performance from 2:30 PM through the close.

With the midterm elections rapidly approaching, it's only natural to ponder what effects the big day might have. Here are some salient points regarding the spectrum of potential results.

Control is up for grabs this November, along with key state and local offices and a number of ballot initiatives in states across the nation. Many voters appear to be concerned with the economy, as inflation has risen to almost a 40-year high and Americans are feeling the pain in their wallets.

Given the slim majority in the House, Republicans would not need a major upset to take the House. The latest polling and most projections suggest that Republicans will regain control of the House, while Democrats hold on to the Senate. Hence, a dividend government.

What could this mean for legislation?

Whatever the outcome, the result could have a significant impact on U.S. tax, fiscal policy, and overall legislative agenda for the next two years.

Should Republicans take control of the House while Democrats keep control of the Senate, the consequence for markets may be minimal. A dividend government is unlikely to pass legislation that is too far to the right or left of the political spectrum. This would imply that large legislation packages targeted at raising taxes on individuals or corporations, for example, would be unlikely for at least the next two years. A split government, on the other hand, may hinder the process of any fiscal rescue package that may be required if a severe economic downturn occurs.

What could these outcomes mean for investments?

Elections only come with one guarantee: they make the outlook for investments more unclear. Midterm elections tend to have a rather subdued effect on equities markets, despite the fact that they do increase some uncertainty. The chart below shows that the S&P 500 tends to increase once political unpredictability subsides in the wake of midterm elections. 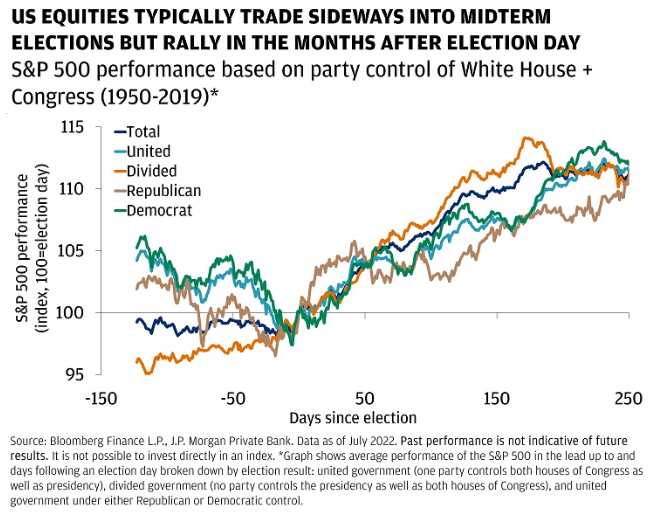 Therefore, as concerns around market volatility rise, and we approach election day, we encourage investors to continue to use their own investment objectives, risk tolerances, and liquidity needs to dictate their appropriate long-term investment allocation.