The yield on Germany’s 10-year government bond first went negative during the summer of 2016 with Japan’s 10-year government bond soon following suit. It’s as if all logic was thrown out the window and the price of risk taking no longer applied. Today, the yields on these bonds remain negative. This is a sure loss for any investor holding throughout the entire maturity.

Like the puzzling event of negative interest rates, something else unlikely went negative for the first time ever. Texas tea, black gold, or oil as many call it, dropped to…. wait for it… NEGATIVE $37 A BARREL! 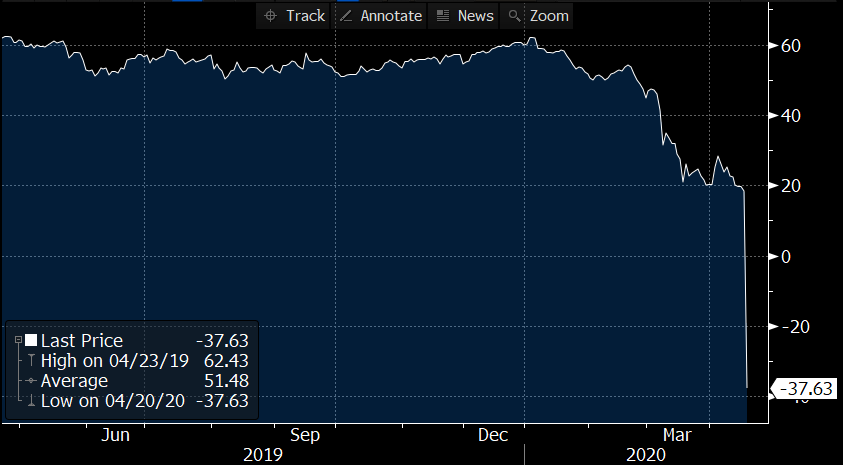 The sudden and precipitous fall can be boiled down to what we believe are a few reasons:

However, despite these events, what occurred in April to drive the price to negative territory was an unexpected, complicated storm that involved the futures market for the price of oil in May. Simply put, there is so much unused oil sloshing around that American energy companies have run out of room to store it. And with the limited ability to store it, energy traders who were forced to take delivery were panicking and selling at any price. Not only were they selling at any price, they were actually paying others to take it off their hands.

Now, if only the price of gasoline was negative, and we all had a reason to drive…

Meanwhile, the stock market has come roaring back, returning +23.5% from the low on March 20. Optimism has reappeared due to positive results regarding a potential Covid-19 therapy, plans for some businesses to reopen during the month of May (although at limited capacity), and continued accommodation from fiscal and monetary authorities.

Until recently, only unemployment claims data put into perspective the toll social distancing and quarantining was taking on the economy. Over 30 million workers have filed for unemployment benefits in the past six weeks, and when the unemployment report for April is released this Friday, more information pertaining to the economic damage will be put into light.

An aggregate survey from economists on Bloomberg are estimating that the unemployment rate will skyrocket to over 16%. To put that into perspective, during the Global Financial Crisis 2007-2009, there were 8.7 million jobs lost over a 25-month period. At the moment, it looks as if we lost almost three times as many jobs in just one month.

Below is a chart illustrating the number of years it took to gain back the jobs lost from the previous two recessions. 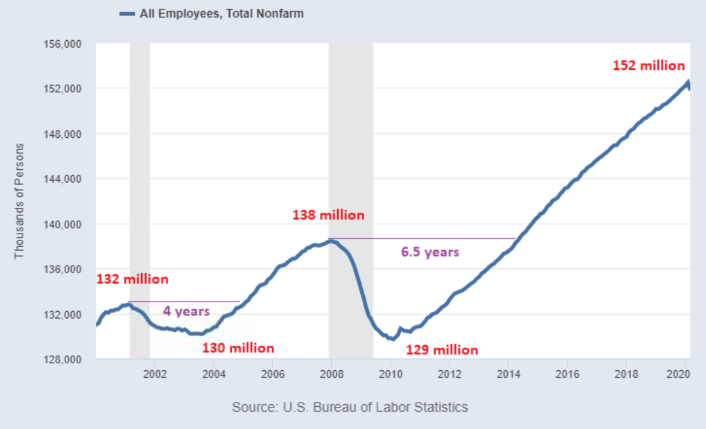 With the number of jobs lost in such a short amount of time and negative oil prices, it makes sense to scratch your head in disbelief as the market has rallied from its lows. However, in our view, it appears the market is pricing in a faster recovery in terms of gaining back employment compared to past economic downturns.

More up-to-date data such as hotel occupancy, rail-car traffic, and passengers traveling through TSA checkpoints can help provide a pulse of some sorts until more economic data is released. This “high frequency data” the last month, albeit substantially down from year-ago levels, is showing signs of life and the possibility of improved animal spirits.