The 2022 NCAA Division I Men’s Basketball Tournament—otherwise known as March Madness—wrapped up in an exciting and unpredictable fashion at the beginning of this month. If you filled out a bracket, chances are you were left a little disappointed with your selections after just the first round. This was due to not just having to call a couple of upsets, but with having to predict 10 teams beating their higher ranked opponents in the first round, followed by six more upsets in round two and another four upsets in the Sweet 16.

Like the unpredictability of March Madness, the first quarter of 2022 and beginning of April showcased rare moments in history and markets. Both the stock and bond markets faltered as inflation raged higher, and Russia’s invasion of Ukraine exacerbated worries of wavering economic growth.

U.S. consumer prices rose in March by 8.5% year-over-year, the highest since 1981, and rose 1.2% from a month earlier, which highlighted the increasing cost of living and market pressure on the Federal Reserve to raise interest rates more expeditiously. According to Bloomberg, gasoline costs drove half of the monthly increase, while food was also a sizable contributor. Some economists expect inflation to settle back down from here, although these forecasts are predicated on stress in supply chains easing and the worst of goods inflation drawing down as Americans shift more of their spending towards services.1

In response to inflation remaining meaningfully above the telegraphed 2% average target, the Federal Reserve finally hiked the federal funds rate by 0.25%. This marks the first rate hike since 2018. The last time the Fed hiked in 2018, the year started with the market expecting 2 hikes, the Fed promising 3, and eventually hiking 4 times before having to ultimately stop due to the market’s swift reaction to conditions that were too tight.

Increasing yields has put significant pressure on bond prices. Year-to-date as of April 14th, the investment grade bond market, as represented by the Bloomberg US Agg Bond Index, has returned a putrid -8.54%. If the market were to close up shop for the rest of the year, this would be the worst annual return since the index began in 1977. 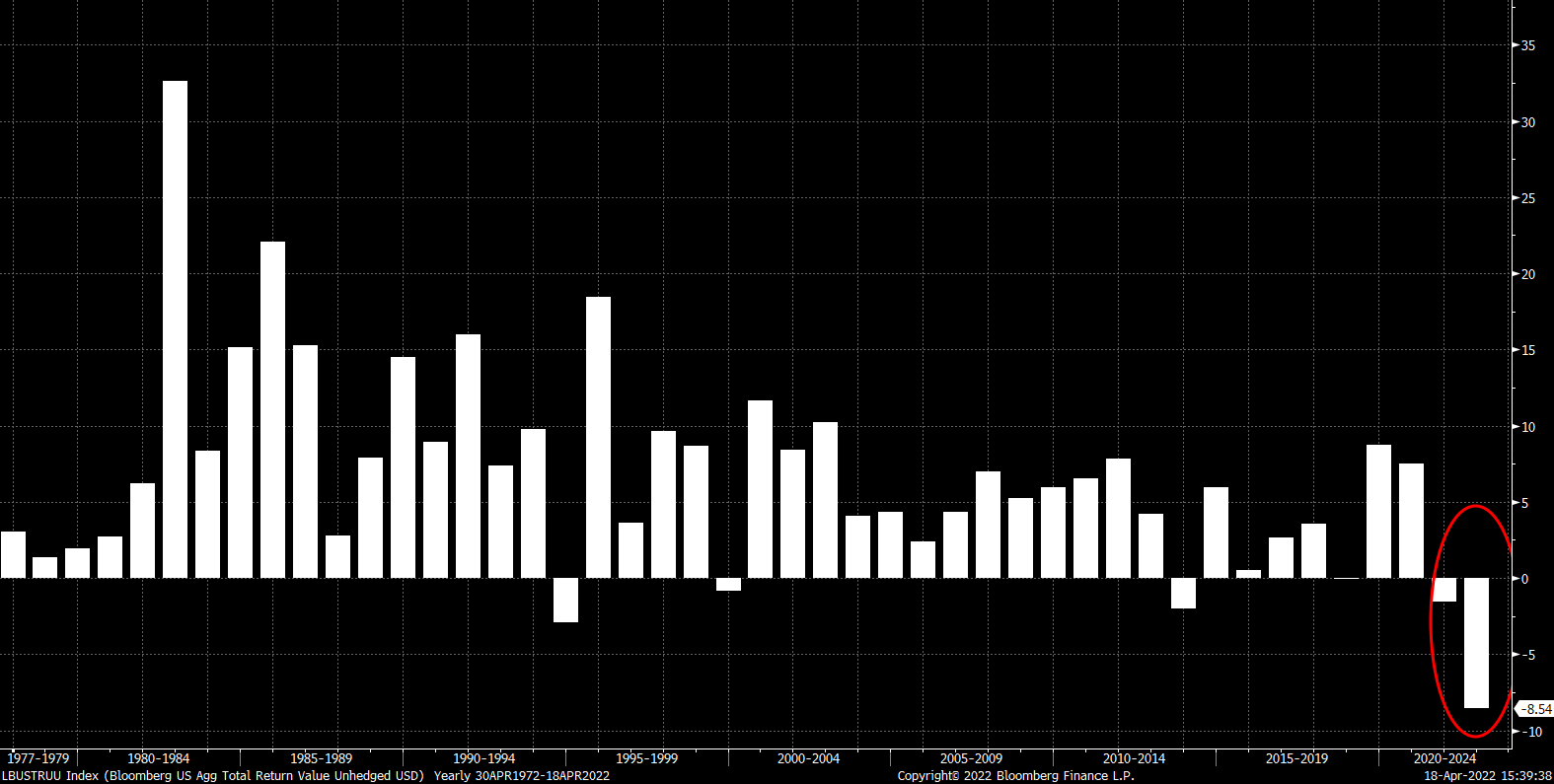 The geopolitical and humanitarian crisis unleashed by Russia’s invasion of Ukraine has created uncertainty layered on uncertainty. Inflation and the threat of slowing growth represent a risk to corporate earnings, and businesses that experienced excess demand during the pandemic have been particularly vulnerable to investor sentiment. In response, consumer confidence remains near 2011 levels and the yield curve inverted.

A yield curve is just a line-graph that shows yields of fixed-income securities from a single sector (e.g., Treasuries) over various maturities at a single point in time. When a yield curve has an inversion, it means that short-term yields reach higher levels than long-term yields. An inversion may occur at more than one maturity, but often cited are the 10-year Treasuries vs. 3-month or two-year Treasuries.

Why is it such a big deal if the yield curve inverts? To start, yield curves are upward sloping most of the time. This makes sense because if one were to lend money for a longer period of time, one would expect to be paid a higher interest rate for taking on the additional uncertainty. When short-term rates rise above longer-term rates, the market may be signaling a quick rise in the short-term rates to offset inflation, and in doing so, cause a recession. Moreover, investors could also be buying long-term Treasuries at a lower yield because they believe that growth prospects look bleak and are hoping to profit off of falling rates.

In either case, the graph bellow illustrates that many yield curve inversions over the last 50 years preceded a recession.

Analyzing past inversions, it is understandable that many investors and market commentators are calling to sell out of stocks because a recession is all but inevitable within the next few years; however, the problem with a call like this is that it isn’t grounded in data.

Similarly, in a 2019 paper, Eugene Fama and Ken French also examined the relationship between inverted yield curves and equity returns. Taking the perspective of a U.S. Investor, they tested whether reducing equity exposure when the term spread is negative would produce better results over various time periods. Their findings led Eugene Fama and Ken French to conclude, “We find no evidence that inverted yield curves predict stocks will underperform Treasury bills for forecast periods of one, two three, and five years.”3

So, does an inverted yield curve have economic implications? Possibly. Should you completely sell out of stocks and go to cash till the dust clears? The data from research indicates that a strategy based on this indicator is not reliable enough to profitably time stock markets. We believe sticking to a well thought out plan that takes into consideration your willingness, ability, and need to take risk remains the correct course of action.