Weather conditions throughout the U.S. for the month of February were quite mixed—lovely in some places, frozen and wretched in others. A similar dynamic has been playing out across various economic sectors.

A few key economic releases gave rise to optimism about the economic recovery in February; but it speaks more to the goods side of the economy, and not so much the services side. With an increase in January, industrial production has rocketed from the lows and continues to improve. Although the year-over-year change has not eclipsed positive territory, the comparisons in future months will be against last year’s lockdown phase, so a hasty move back into positive territory may be in the cards.

Beyond industrial production readings, retail sales raised some eyebrows—meaningfully besting economists’ estimates. The year-over-year change is now above pre-pandemic levels, which was no doubt helped by the latest round of fiscal stimulus checks. 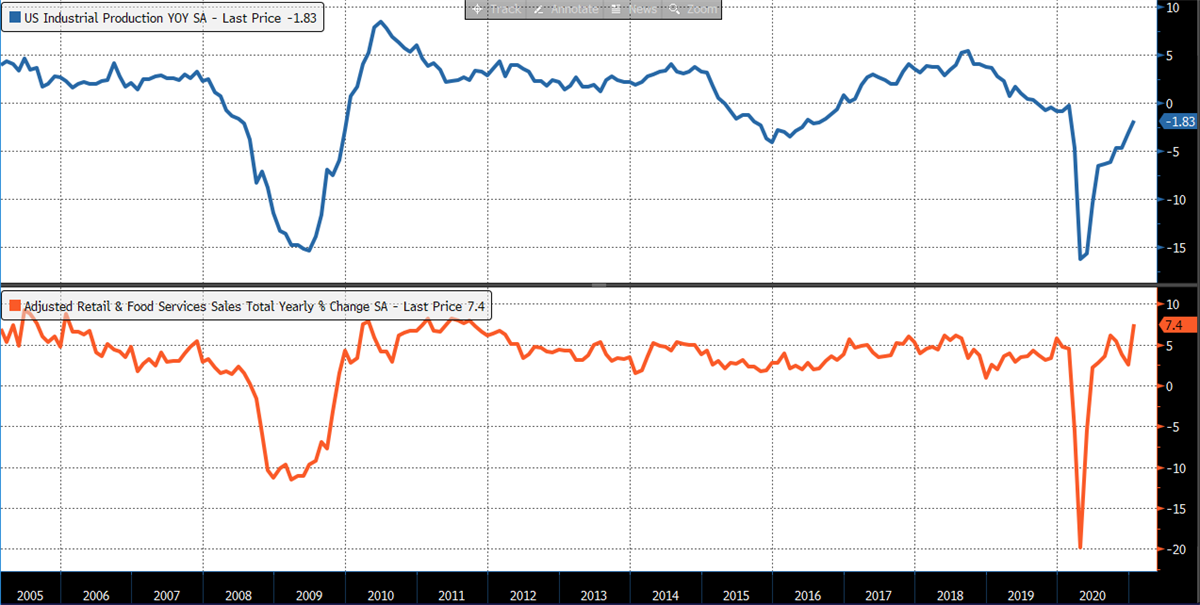 Markets have steadily risen since the beginning of the year, albeit with a few minor draw-downs. While the S&P 500 Index is only slightly positive for the year, the Russell 2000 Index, consisting of small capitalization companies, posted a +5.0% gain in January and is up +11.58% as of February 26th.

This divergence has reflected several factors: 1) the dynamics of retail trading and short selling in small caps, 2) continued rebalancing into the style, 3) and a tactical rotation based on optimism surrounding the economy and fresh stimulus.

The rotation from large to small company performance and from growth to value performance is illustrated below by a falling ratio and line. 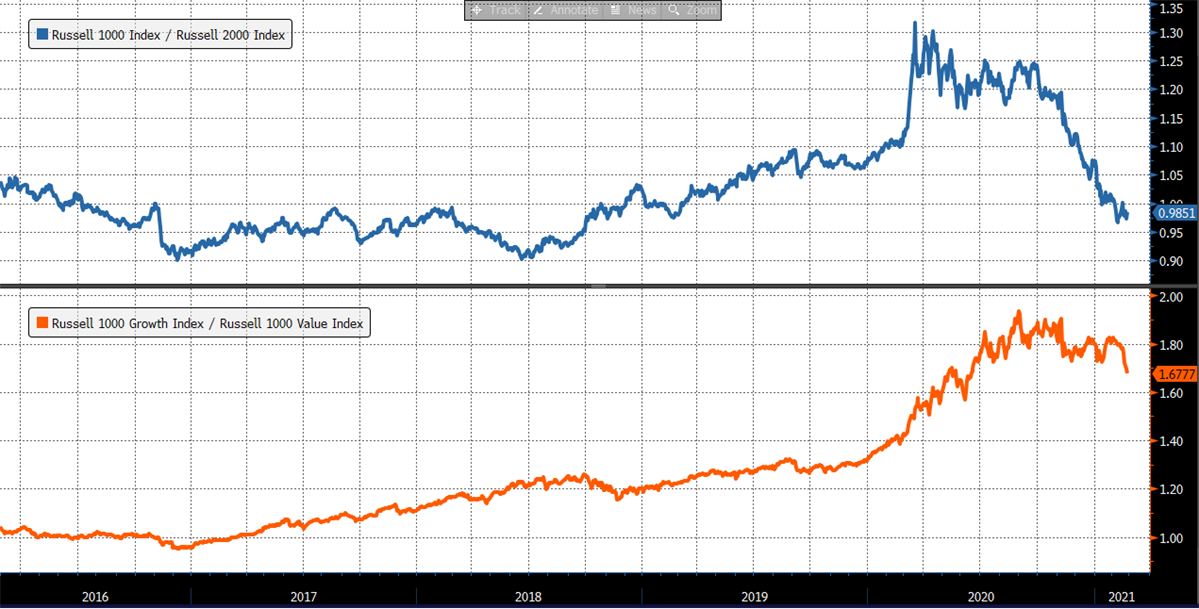 Coronavirus cases, hospitalizations, and deaths have all been falling at a rapid pace. Updated data now shows that 14.9% of the total U.S. population has received at least one vaccine dose, and 7.4% of the population has received all doses prescribed by the vaccination protocol.1 Efforts to combat the virus remain in full swing, however, a risk to the recovery taking shape includes the coronavirus variants that appear to spread more quickly and are perhaps more fatal.

A fresh surge in U.S. jobless claims painted a bleak picture and showcased the ongoing wreckage experienced by the job market. Nine million Americans are still unemployed, with four million having left the workforce entirely. Treasury Secretary Janet Yellen and Fed Chairman Jerome Powell have each defended the need for $1.9 trillion in pandemic-relief spending, which may pass Congress by mid-March.

In response to signs of a recovery, fiscal stimulus, and unabated monetary measures, the 10-year Treasury yield has risen from 0.92% to a high of 1.60% year-to-date. This is an enormous move in such a short amount of time.

Bond prices move inversely with interest rates, and the recent rise in rates has caused bond prices to fall. This relationship basically boils down to bonds competing against one another on the interest income they provide to investors. The Bloomberg Barclays Aggregate Index, a proxy for measuring the performance of the U.S. investment grade bond market, is down -2.15% as of the end of February.

Rising inflation expectations driving bond yields higher can cause volatility and draw-downs higher than one would expect. According to Bespoke Investment Group, going back to 1988, there have only been four other years where the Merrill Lynch 10+ Year Treasury Index has been down more than 10% at any point in a given year, and this current draw-down of 11.2% through the close on February 25th ranks as the third steepest on record.2

Core PCE, the Federal Reserve’s preferred inflation measure, remains subdued at 1.5% -- below the Fed’s 2% average target. Any hint that the Federal Reserve would stop quantitative easing could cause investors to overreact, but we believe an inflation trend could be moderated due to a high unemployment rate, flexibility in the supply of goods and services, large national debt overhang, and tempered wage growth.