Around this time every year, the chair of the Federal Reserve and central bankers meet in Jackson Hole, Wyoming. The Fed chair typically uses this rustic venue as an opportunity to deliver a particularly important and long-range message. But, unlike years past, this year’s speech was narrower in scope, direct, and crystal clear.

Key Takeaways from the speech are noted below:

The tone of the address surprised market participants who had assumed that a soft landing was more likely. A scenario such as this is now referred to as a "growth recession," which, unlike a soft landing, is characterized by prolonged periods of low growth and a slight rise in unemployment. However, it falls short of an outright economic contraction.

Prior to the speech, the implied federal funds rate by the end of 2022 was expected to be around 3.50%, up from the current target of 2.50%. Following the speech, however, implied interest rates for the end of the year slightly increased to around 3.75% in reaction to remarks from Jerome Powell, and no rate cuts are anticipated until the second half of 2023.

Historically, each of the last eight Fed hiking cycles has resulted with the fed funds rate being higher than inflation. With inflation sitting at 8.5% and a 2.5% federal funds rate today, there is undoubtedly a balance to be struck. How far will rates rise? Nobody knows, but a favorable scenario would be if the Fed raises another 1.00% and inflation comes down precipitously. 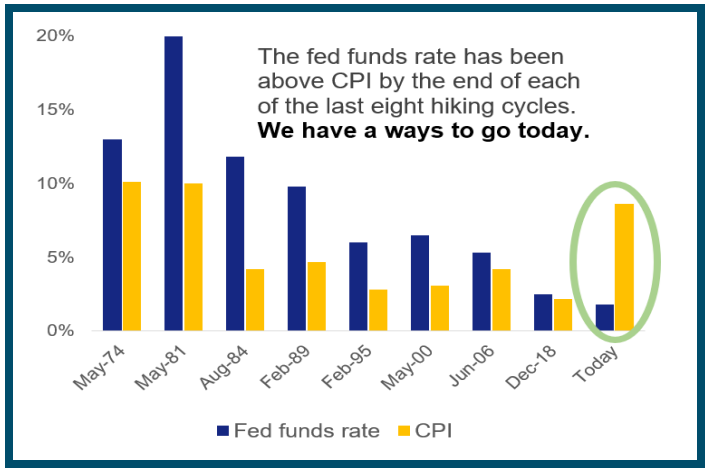 So, what has the stock market been up to during these wild swings in market expectations?

Starting on June 16, the S&P 500 surged 17% after beginning the second half of the year in bear market territory, giving anxious U.S. equities investors a much-needed relief. Sadly, news from the Jackson Hole event brought the bear out of hibernation and the stock market gave back roughly half of its gains from the bottom. 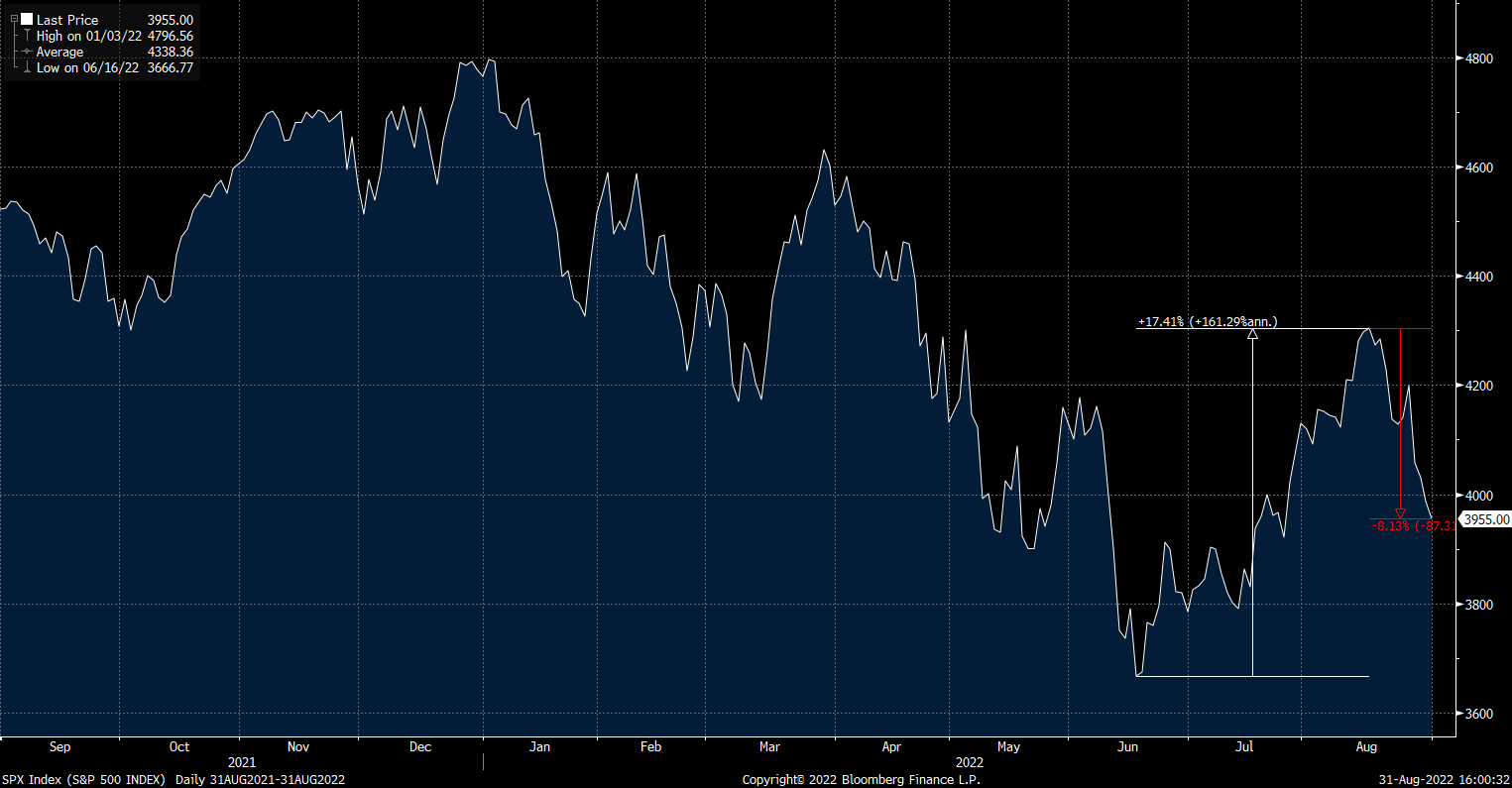 In addition to the Fed address, the mid-June stock market rally was most likely tied to the nearly 3.5% peak in the 10-year Treasury yield, with only two days separating that peak on June 14 with the S&P 500’s low on June 16. Furthermore, the resumed rise in the 10-year Treasury yield from a trough that nearly reached 2.5% as August began may have also contributed to last week's stock market downturn.

The reigniting of higher bond yields has continued to put pressure on the U.S. investment grade bond market. Shown below, you can see just how big of an outlier the performance has been since the inception of the index in 1976. 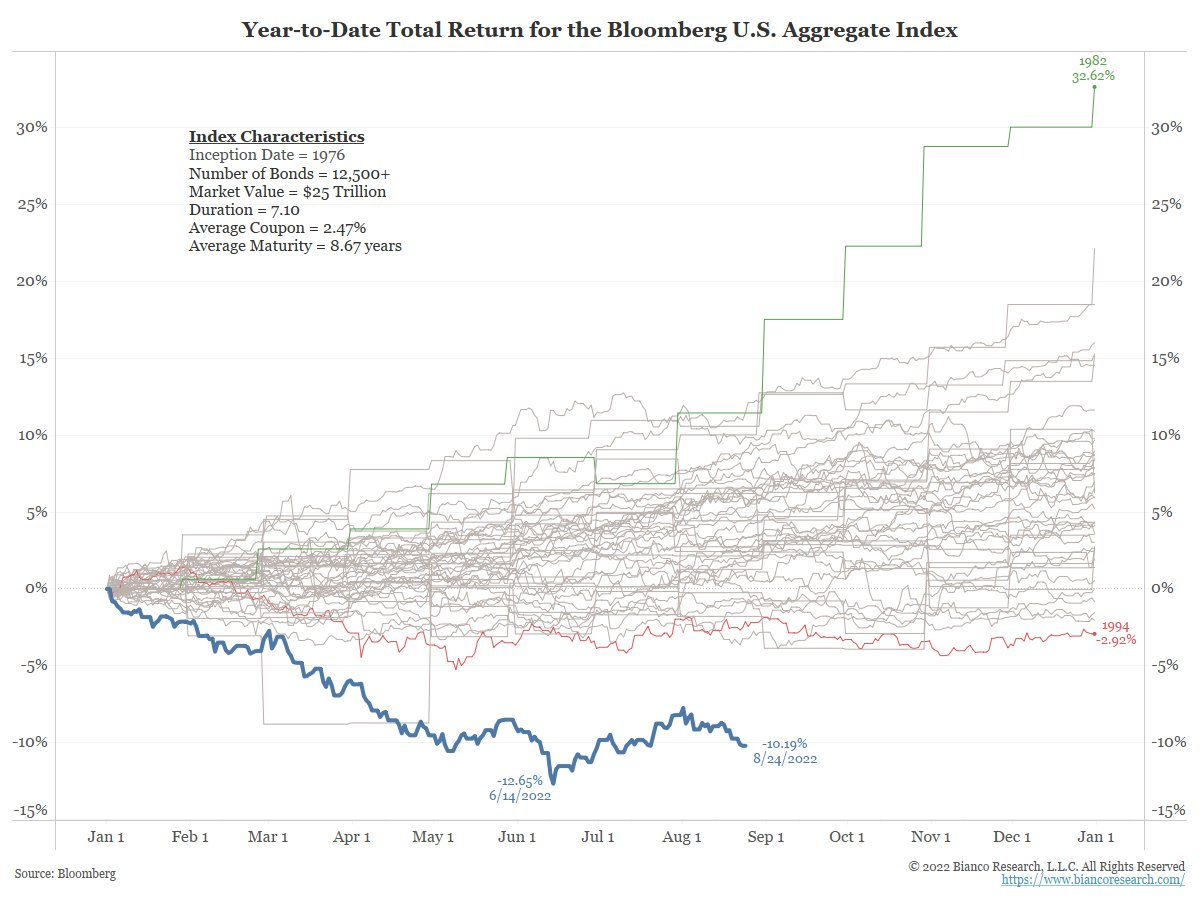 It’s hard to believe, but bonds can have troubling years. It’s even harder to fathom both the equity and bond markets down in the same year. In fact, according to BlackRock, if the year were to end now, this would only be the third time since 1929 this has ever happened. 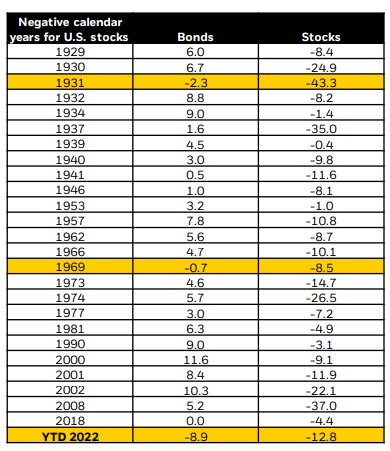 Source: BlackRock; Morningstar as of 5/31/22. U.S. bonds represented by the IA SBBI US Gov IT Index from 1/1/26 to 1/3/89 and the Bloomberg U.S. Agg Bond TR Index from 1/3/89 to 5/31/22. U.S. stocks are represented by the S&P 500 Index from 3/4/57 to 5/31/22 and the IA SBBI U.S. Lrg Stock Tr USD Index from 1/1/26 to 3/4/57, unmanaged indexes that are generally considered representative of the U.S. stock market during each given time period. Past performance does not guarantee or indicate future results. Index performance is for illustrative purposes only. You cannot invest directly in the index.

The good news is that the paltry yields offered just one year ago are substantially more attractive today, implying larger predicted returns for the asset in the future. This is due to the strong relationship between starting yields and the subsequent forward returns for bonds.

With August now wrapped up and the tough talk of the Fed behind us (for the time being), all eyes will continue to be on inflation, inflation expectations, and job data to assess signs of a potential shift in future policy.