During November, a slew of economic data was released, but the month began on a soft note as the Fed raised its policy rate by the anticipated 0.75%, marking the fourth consecutive hike of this magnitude.

Market tone improved significantly on November 10th after October headline inflation came in at 7.7% year-over-year, which was the smallest annual increase since the start of the year and down from 8.2% in September. Core prices, which exclude food and energy, advanced 6.3%, pulling back from a 40-year high.

Generally speaking, a 7.7% year-over-year increase in inflation is nothing to write home about. However, the market doesn’t generally work in absolutes. It works in terms of “better or worse” rather than “good or bad.” In this particular case, the news was better, and the S&P 500 Index increased 5.54%, its biggest one-day gain of the year thus far. 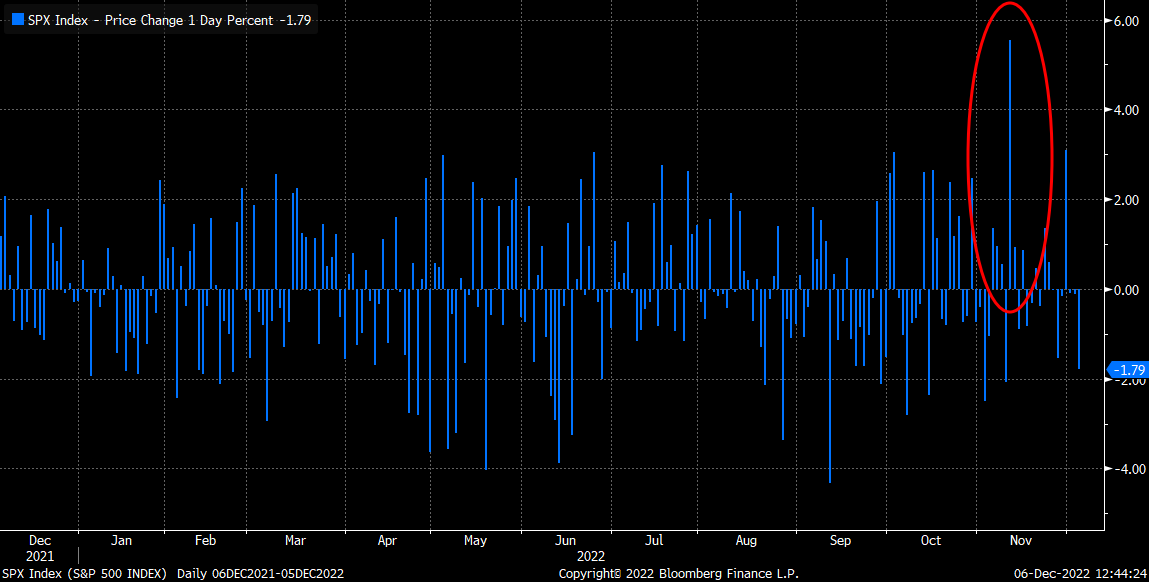 Past Performance is no guarantee of future performance. You cannot invest directly into an index.

Federal Chairman Jerome Powell spoke at a Brookings Institute event at the end of the month and confirmed that moderating the pace of 75 bps hikes “may come as soon as the December meeting” but emphasized “we have a long way to go to restoring price stability.”  While economists believe a recession in the United States is more likely than not in the next twelve months, Powell said a so-called soft landing for the economy remains “very plausible” and “still achievable,” though he recognized the route to such an outcome has been narrowing.

Jerome's remarks were warmly received by the market, which then experienced another strong upward movement that brought the S&P 500 Index back up to its 200-day moving average. Additionally, the market expectation for the terminal fed fund rate decreased, and the yield on the 10-year Treasury note declined 74 basis points from a high of 4.24% on October 24 to 3.50% on December 1.

Cameron Crise, a columnist for Bloomberg put it best, writing, “The shift in market pricing wasn’t a revolution, but more of an evolution—traders just chipped a little bit off of each of the next eight meetings.”

This level of inversion hasn't occurred since the 1980s, and based on data according to Apollo, the likelihood of a recession occurring sometime in the next 12 months is higher than at any time in the last 50 years, according to forecasters. If a recession does occur, it would be the most anticipated recession ever.

Corporate earnings, payrolls, and GDP are all used to assess a slowing economy and recession. When looking at previous weak economic times, equities tend to bottom months, if not years, before key economic indices begin to bottom and then rise again. Below is data from prior recessionary periods ranging from the 1950s to the 1990s. 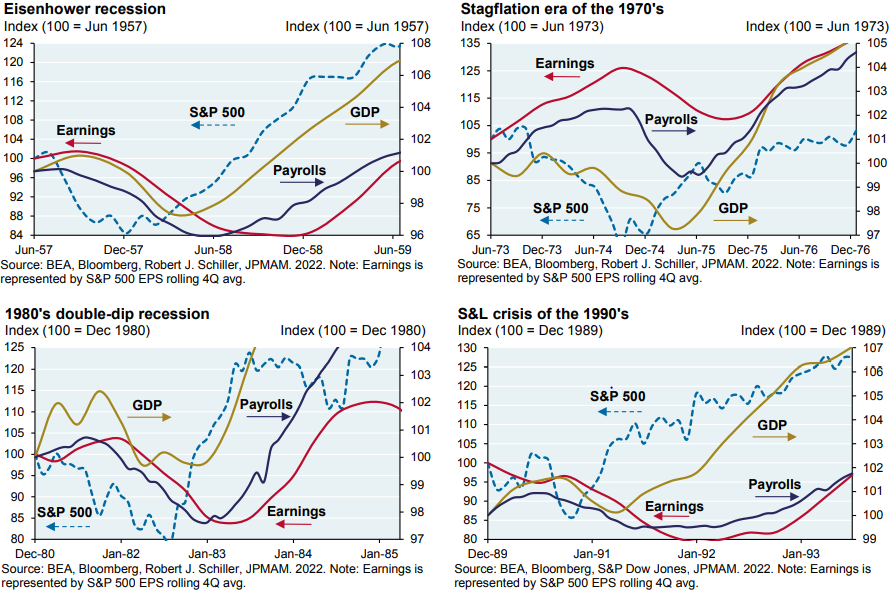 The same pattern occurred during the Global Financial Crisis and COVID pandemic, and we see no reason why this cycle would not end up looking like many of the previous ones. Why? Because the stock market is always gazing ahead rather than in the rearview mirror.

Towards the end of this year, a litany of gloom on earnings, interest rates, inflation, Central Bank policy, valuations, energy, housing, and the war in Ukraine will likely continue to take place. These are unquestionably significant; yet, the market is continuously pricing these developments and probabilities into the future. It may just take a relative "better" from here to change the tides.