From 1928 to 2020, November has on average been a favorable month for equity investors. The month of November ranks as the fifth best month for the S&P 500 Index over this time span, with an average monthly percentage price gain of +0.9%.1

Analyzing the days leading up to Thanksgiving, it appeared as if November was set to best its average return; that is until a new headline struck. Articles screamed across the world of B1.1.529, a variant of the Covid virus that has been named Omicron. Omicron was discovered in South Africa, with other cases soon following in Belgium, Israel, and Hong Kong.

On November 26th, the World Health Organization labeled Omicron a “variant of concern” because of the higher risk of transmission and possibility of severity. In a region of South Africa, an increase in the positive testing rate rose from 1% to 30% in one week as the Omicron variant outcompeted the Delta variant.2 This may suggest a higher degree of contagiousness; however, vaccination rates are fairly low in South Africa, so there is not enough information yet to determine what the spread would look like in countries with higher vaccination rates.

Given the variability and plethora of information coming out every hour, the market did not want to wait to find out how bad it may become. The reaction was sudden and swift the day after Thanksgiving. Unsurprisingly, risk assets sold off, including sharp losses in stocks in the U.S. and abroad.

Small sized companies, represented by the Russell 2000, took the brunt of the carnage and fell -3.66%. Oil prices plunged over 10%, and the VIX Index, a measure of future expected volatility, rose meaningfully to levels not seen since the Delta variant emerged in February of this year. Meanwhile, a safe haven asset such as the 10-year Treasury bond provided protection as yields fell from 1.64% to 1.47%, registering one of the largest one-day moves since 2020. 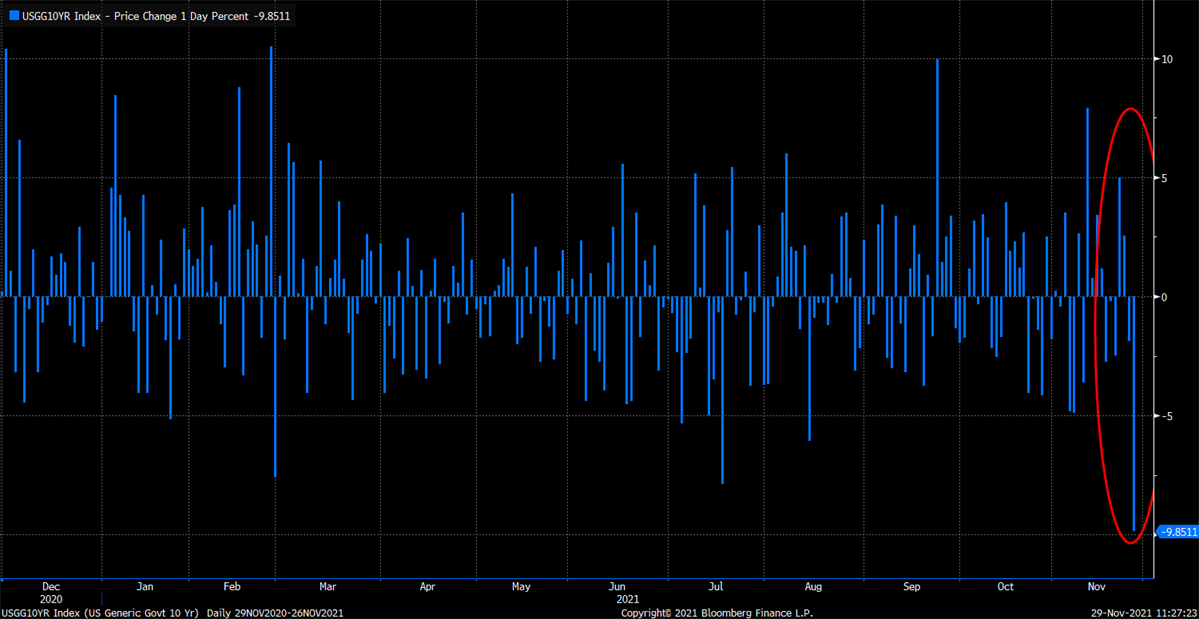 Within specific industries of the world equity market, it was déjà vu all over again. The emergence of the Delta variant in late February ended the rally in leisure-travel industries, as measured by the Solactive Airlines, Hotels, and Cruise Liners Index, and was followed by a few months of sideways price action. This time around, the index took a larger beating.

Below is a list of the top ten worst performing stocks of the index on November 26th: 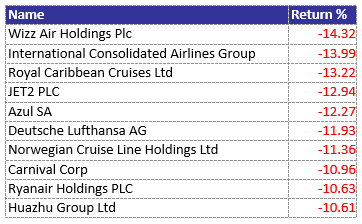 The markets’ sharp moves to the downside were reminiscent of lockdown fears and more draconian measures from policymakers. A rotation back to at-home stocks such as Zoom and Peloton took place, and falling yields were suggestive of inflationary expectations falling once again. Extrapolating these market readings may prove to be perilous, as this is certainly a different environment from the original Covid-19 outbreak.

Beyond news of the virus, a $1.2 trillion infrastructure package was signed into law by President Biden, which is supposed to channel $550 billion of new investments to America’s broadband, roads, bridges, power and water systems, rail, and public transportation. Additionally, a $1.75 trillion spending package aimed at social initiatives was passed by the House and is now in the hands of the Senate.

Proposed payment for the Build Back Better Act remains in flux—having rejected raising corporate taxes and individual tax rates—some of the tax changes being considered include: a surtax on millionaires above a threshold; corporate minimum tax; tax on stock buybacks; a Medicare tax on active pass-through income; a limit on business loss deductions; and reducing the estate tax exemption, among other possible changes.

In summary, news surrounding the new variant and Build Back Better Act will most certainly change by the day and may seem like Déjà vu over and over again. Given the stretched markets, any new catalyst may cause fear and possibly a correction. Since 1980, the average intra-year drawdown for the S&P 500 has been 14.3%.3 As hard as it is to stomach, it is important to remember that these drawdowns are a feature and not a bug. 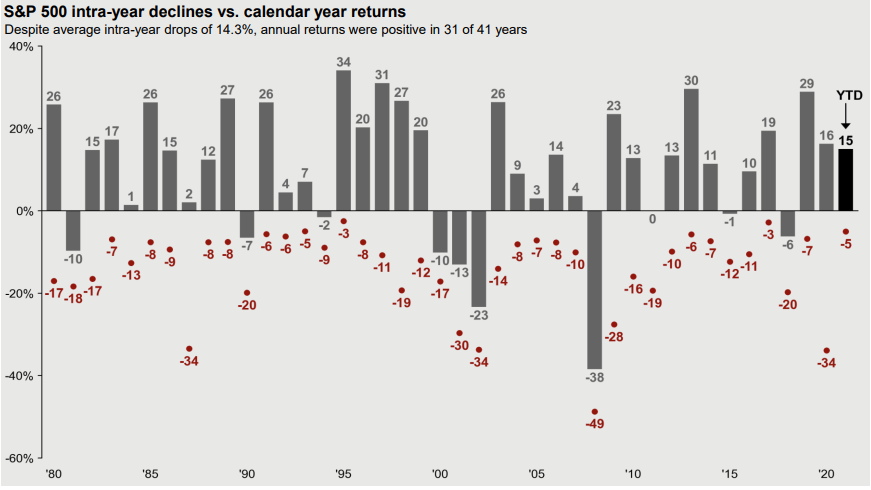