Bill Miller is a renowned investor that outperformed the S&P 500 Index for 15 consecutive years in a row through 2005, an impressive streak that made him one of the better known and well respected investment professionals on Wall Street at the time. That is until he made some ill-timed bets on hard-hit financials stocks during the Global Financial Crisis and his fund’s AUM fell from a whopping $77 billion to $800 million.

Rising from the ashes, Bill held on to a lot his Amazon stock he bought soon after it went public and starting buying bitcoin when it traded for only $200-$300 a coin. Miller is now a billionaire despite his past blow-up. A lot can be learned from his story.

At the end of each quarter he releases a quarterly commentary with little nuggets of wit and drops of knowledge. Unfortunately, in this last quarter’s letter, Bill writes that he will be taking a leave for a while unless something interesting compels him to pound the keyboard once more.

While the investing community at large is sad about the lack of future letters, Mr. Miller does write one last piece of substance worth reading and holding on to for decades to come. “When I am asked what I worry about in the market, the answer usually is “nothing,” because everyone else in the market seems to spend an inordinate amount of time worrying, and so all of the relevant worries seem to be covered. My worries won’t have any impact except to detract from something much more useful, which is trying to make good long-term decisions.” He goes on to list a few worries such as China’s regulatory actions, elevated fuel prices, labor shortages, inflation or stagflation, hurting supply chains, polarization in Washington, and the potential effect of the Federal Reserve tapering.

He’s right. And he’s been doing this long enough to understand the implications of his words. But why is he right? Because there is always another headline. Maybe it is about the worries listed above, or maybe it will be about future tax rates. There will never be a shortage of headlines, and it’s not to say that these issues don’t matter. They do matter, and the market will price them to the best of its collective ability; however, most of these headlines are noise and do not alter the big picture.

Looking at the table below, think about how many of these headlines or drawdowns were truly memorable or were worth cashing out and stuffing cash in a mattress? Even the 20% drawdown in 2018 seems like a distant memory. 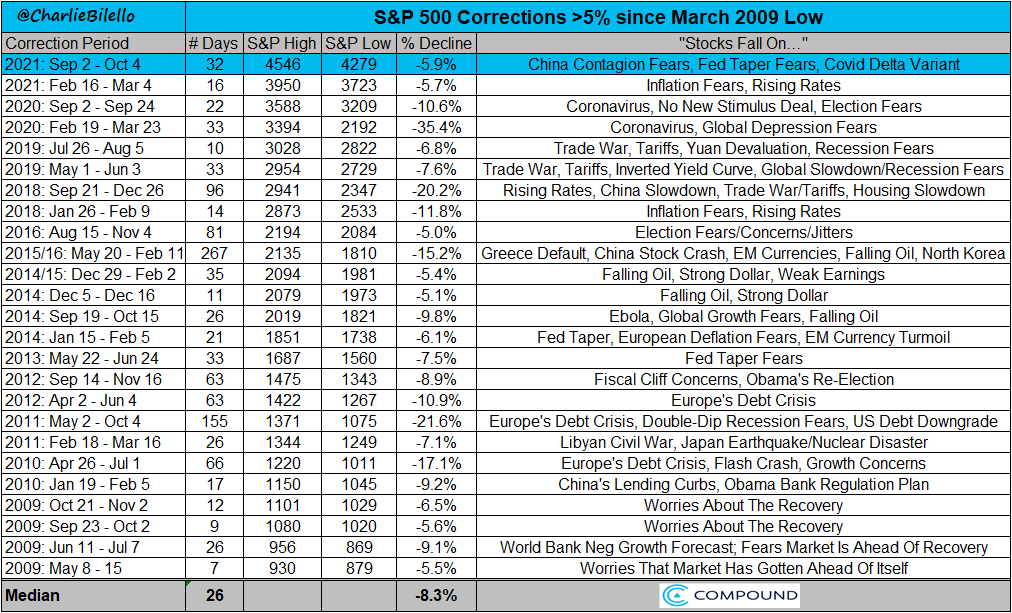 Recent higher than average inflation data caused Jack Dorsey, CEO of both Twitter and Square, to send a tweet that went viral over the weekend, ending with almost 26K retweets and 76K likes.

Hyperinflation is a term to describe rapid, out-of-control price increases in an economy to the tune of 50% per month. It is one of the worst types of problems a country can have. The consumer price index’s latest reading as of the end of September was 0.4% month-over-month and 0.3% month-over-month during August.1 Nowhere near 50%+. Additionally, if Jack actually believed hyperinflation was coming, he would have a lot less cash on both of his company’s balance sheets (as the cash would be debased and almost worthless) and would be trying to lock in an inordinate amount of debt with a decade long maturity and buying inflation-protected assets. Actions speak louder than words, and it doesn’t seem many believe the narrative he is espousing.

While we don’t believe hyperinflation is coming, it is certainly possible inflation can remain at elevated levels not seen for quite some time. As supply and delivery problems work their way through the system, we ultimately believe inflation will come down to lower levels—albeit higher than the last decade. Aging demographics, technological change, higher levels of debt, and globalization may continue to act as headwinds on prices.

New headlines may replace the old ones quite rapidly given the continuous bombardment of information we each receive on a daily basis. Taking a step back and focusing on the bigger picture can help, but we are here to aid in any questions you might have surrounding these headlines and how they might affect your investment plan.